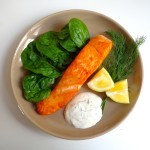 A popular dish in Paris bistros these days is saumon à l’aneth — salmon with a sauce of cream and fresh dill. The salmon is generally served steamed or poached. In this version, the salmon is instead pan-seared for a crusty golden exterior and meltingly tender interior. The sauce adds a little je-ne-sais-quoi (French for I don’t know what it is, but it’s something special). Served with fresh veggies or a little salad, it makes a lovely summer meal.

But now comes the question: What kind of salmon to buy? Atlantic or Pacific, farmed or wild? Over here in France, the salmon on offer is mostly Atlantic, and I tend to prefer it, for taste and texture. But from what I’ve read, farmed Pacific salmon, with fewer contaminants, is preferable to farmed Atlantic salmon. As for farmed vs. wild, there is no question that wild is a better choice, healthwise and tastewise. The issue here is possible depletion of stocks. But if you treat salmon as a delicacy to be served from time to time, and not a staple of your table, then I think it’s a fair choice.

Now some news from the Paris food scene. An event took place across the street from my home a couple of weeks ago with the opening of Maison Plisson, a new high-end grocery shop with a few tables for drinks and light meals outside. This might not sound like much of an event in a city overflowing with fabulous farmers’ markets. But in fact they held a black-tie cocktail launch, and the days that followed saw ladies-who-lunch lining up outside to see what’s cooking. Some made their way to slightly scruffy eastern Paris from the fashionable 7th and 16th arrondissements — to shop for food! That is an event.

Of course I’ve checked out the place and can highly recommend it if you happen to live in the vicinity. They have a wonderful cheese counter, a fine selection of fresh fruit, veggies and herbs, and a fabulous meat department, headed by Eric Nieulat, whose team crisscrossed France for a year before the opening to find the best sources of fine meat and poultry. Alas, there is no fish department yet.

Maison Plisson, which has been written up in glowing terms in media from Le Monde and Le Figaro to Elle magazine, was founded by Delphine Plisson, who at the age of 40 left a career in fashion (she had worked for Agnès B, Yves Saint-Laurent and Claudie Pierlot) to pursue her dream of creating a food emporium in Paris with top-quality, mainly local products. Having lived in the States, she says she was inspired by places like Dean & DeLuca and Whole Foods. Funny to think of American inspiration for French gourmets!

While the upstairs is devoted to fresh produce — and has a terrific bakery next door (the toast in last week’s photo of fromage fort was Plisson’s country bread, which they call pain d’ici, or ‘bread from here’) — the downstairs is stocked with less perishable foods and a fine if pricey collection of wines. For example, instead of Nutella, which includes palm oil, the shop stocks a more natural dark-chocolate-and-hazelnut spread from Corsica. Blind tastings were held for every product before a final choice was made.

It’s a great development, although the advent of Plisson is another step in driving my boulevard upmarket. The trend started a few years ago with the arrival of the Merci emporium and cafés. In Merci’s wake came hip fashion shops like Sandro, Swilden’s, A.P.C., Melinda Gloss, Leon & Harper and, only yesterday, Maison Kitsune. Yikes! It may be fashionable but, as they say, there goes the neighborhood.