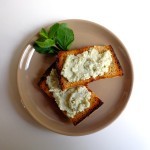 Fromage fort translates literally as ‘strong cheese’, but — in a country known for its many strong cheeses — that does not begin to convey the pungency of this spread of aged cheeses, garlic and eau-de-vie. It could more rightly be called ‘knock-your-socks-off cheese’. I first discovered it at a Paris wine bar called La Tartine, where it was served on slabs of dense country bread, with a glass of sturdy Bordeaux or Côtes du Rhône on the side.

But what, exactly, is fromage fort? Traditionally, it was a way of preserving cheese that had dried out or become so strong as to be unpalatable. Some will tell you it arose in Burgundy, where rich and wonderful cheeses like Epoisses are produced (it’s a creamy cheese from cow’s milk that is washed in marc de Bourgogne, the local eau-de-vie). But in fact there are as many recipes for fromage fort as there are corners of France. In the south it is often made with goat cheese, near the Swiss border it is made with gruyère, and in the rugged Auvergne region of central France it is made with blue cheese.

The names of these various versions could form a geographical dictionary of French culinary inventiveness. There is le brous (aka le cachetti) from the foothills above Nice; le miromando (served with blueberries) from Ardèche, west of the Rhône; le casgiù merzu from Corsica (fermented with larva), and — believe it or not — a cheese called le pourri bressan, which translates as ‘rotten cheese from Bresse’.

I wanted to track down a bona fide recipe for fromage fort, so I stopped by at La Tartine last week to chat with the chef. Unfortunately La Tartine changed ownership a few years back, and it is no longer served there. (In fact, it is rare these days to find fromage fort on any bistro menu — an excellent reason, if any was needed, to make it oneself. ) But the current owner, Bernard Séguis, was happy to share his recipe — a Burgundy version that incorporates a broth made of the whites of leeks into the mixture. He suggested serving the spread accompanied by walnuts or slices of pear.

My modernized version omits the broth. And you don’t need to wait for your cheese to get old in order to make it. The spread can be whipped up in a matter of minutes and served with wine during cocktail hour, at lunchtime as an open-faced sandwich (une tartine) or as a cheese course after a larger meal. Be sure to have some sturdy red standing by.

Food writing competition: My friend Jonell Galloway, author of the web site The Rambling Epicure, is sponsoring a competition for newcomers to food writing. If you’ve ever wanted to try your hand at writing on food-related subjects — fiction or nonfiction — click here for details.