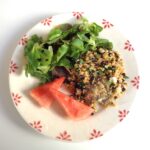 When staying with friends in Provence this summer, I was served a mixed-grain salad that knocked my socks off. The star of this salad was petit épeautre, or einkorn wheat, a rustic grain with a nutty flavor that is grown locally and has become popular among foodies throughout France. It married delightfully with the other ingredients — quinoa, lentils, chopped herbs, shallots, ginger and an Asian-inspired sauce of sesame oil, soy and lemon juice.

Allow me to set the scene, which couldn’t have been more charming. We were gathered around the long wooden table of my friends’ kitchen in an old stone house in Saint-Rémy-de-Provence, lunching indoors because hot winds were blowing. In the cool dim of the kitchen, out came a tangy green bean salad, out came a surprising Greek salad — with more watermelon than tomato (wonderful, watch this space), and out came the sesame-flavored mixed-grain salad. I loved it most of all, and asked for the recipe.

When I got back to Paris and set out to duplicate the dish, I discovered that there were several varieties of the grain I’d always heard described simply as épeautre. Which to choose? A phone call established that it was not, as I had believed, spelt, or grand épeautre, but indeed einkorn, or petit épeautre, which has been grown in the region since the Romans conquered Gaul and in fact is one of the first grains to be domesticated, the earliest known cultivation dating back some 9,000 years.

Once I’d obtained the einkorn, making the salad was a cinch. You cook the grains and lentils until they are tender, chop the herbs, shallots and ginger, whisk up the sauce, combine it all and refrigerate long enough for the flavors to blend. It’s a salad that could stand on its own as a first course or be served alongside just about anything, in any season, enhanced perhaps with a glass of chilled rosé. It’s healthy, it’s vegan, it’s virtually gluten-free. Best, it’s absolutely delicious.