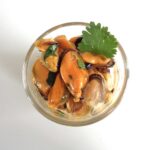 Mussels with garlic, hot pepper, olive oil and fresh herbs, served in small glasses at cocktail hour, is a specialty of the charming Mediterranean port of Sète. This is local cuisine at its finest — le piste de moules, as it’s known, can be found at the many bars lining the canals of this Venice-like town, and in the homes of its residents, but practically nowhere else in France. I have a friend who lives there, and he was kind enough to share the recipe.

It’s very simple. The mussels are cooked à cru, i.e. over high heat with nothing else in the pot — no wine, no butter, no olive oil. They are removed from their shells, bathed in a sauce of the other ingredients — the garlic and hot pepper are traditionally crushed in a mortar and pestle, with olive oil added little by little — and allowed to rest long enough for the flavors to blend.  Served in verrines or on a platter with toothpicks, the mussels make a perfect partner for the white wines of the region, like Picpoul de Pinet. As this wine is nearly as hard to find elsewhere as the dish itself, any crisp white or rosé will do.

I discovered le piste de moules on a visit to Sète a few years back during the height of summer, when the town is crowded with tourists and the beautiful white beaches are packed with lounge chairs, umbrellas and happy swimmers. I went back a couple of times, but decided not to go to the Mediterranean shore this year because of the virus. Nonetheless, I had a hankering for the dish and made it twice over the summer — in July in Normandy, and in August in Paris. Traditionally the fresh herb used is parsley, but I innovated, using basil once and cilantro the other time. Fine.

Sète, which is famous in France as the hometown of both the poet Paul Valéry and the singer Georges Brassens, has other gastronomic specialties that are found only there: la tielle and les zézettes. I tasted the former once, repeat once. La tielle is an octopus pie with a doughy crust that I found appealing neither to the eye nor to the palette, although other people I know think it’s fabulous. Zézettes are elongated sugar-coated cookies that take their name from a French diminutive for … the male organ. (I know, but hey, this is France.) They’re tasty if a bit bland, and are improved when dipped in coffee.

Another local specialty, la bourride de baudroie, is found in different variations all along the French Mediterranean shore. La bourride is fish served in a soup based on aïoli  — in this case, monkfish, which is known as baudroie in the south and as lotte in the rest of France. La bourride differs from bouillabaisse in that no tomatoes are used in the soup, which is a pale yellow color. It’s delicious, and I’ll post the recipe one of these days.

As for the name of the mussels dish, I wondered why it was called ‘piste‘, a word that generally means ‘track’ or ‘trail’ or ‘floor’ (as in dance floor) or ‘runway’, in which case it is a feminine noun. In the case of this dish it’s a masculine noun. I searched online and drew a blank, so I turned to the the excellent French dictionary Le Petit Robert and the culinary encyclopedia Larousse Gastronomique. No mention of the masculine noun or the dish. At that point I got in touch with Serge, my friend who lives in Sète.

He also didn’t know, but said he’d check with some local friends who were coming to dinner. Their consensus: ‘Pister, in pharmacies, means to crush something in a mortar. Le piste is thus a result of the crushed garlic. Even people from Sète don’t know this.’

After receiving Serge’s message, I took a closer look in Le Petit Robert and saw that I’d missed the essential etymological note at the start of the entry for ‘piste‘. It says the word derives the Italian pista, a variation of pesta, which comes from the verb pestare, ‘to crush’. How this evolved into the present-day sense of ‘trail’ or ‘track’ is a mystery, but the note verified something I’d already suspected — that piste (masculine) is related to pesto and pistou (French pesto), also masculine.

These days you don’t need a mortar and pestle (note the relation to pestare) in order to make le piste de moules. You can make the sauce in a blender, or simply put the garlic through a press and crush the red pepper by hand, as I do. Whichever method you choose, the result will be a tasty and eye-pleasing start to an evening.