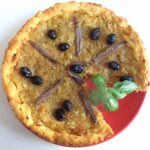 This onion-anchovy-olive tart from the south of France looks remarkably like pizza. (And it’s name, pissaladière, would seem to be related to pizza, too. More on that later.) I had the good fortune on a recent trip to Provence to be treated twice to pissaladière, one homemade and the other from a bakery. When I got back to Paris last week, I decided to try my hand at this classic dish, which hails from the Mediterranean city of Nice.

I had actually been planning to make pissaladière for a while in order to share the recipe with you. What stopped me was the idea of making the pie’s special dough from scratch. Perhaps because I first tasted pissaladière at a sunny café perched high over the Mediterranean in August, I associate this dish with the heat of high summer, a period not conducive to kneading and baking. (Of course one could use store-bought pizza dough for this pie — but one wouldn’t get the same result.)

When I looked into the matter, however, I discovered that the dough for pissaladière requires no kneading. It is made not with yeast but with baking powder (levure alsacienne in French), along with a good dose of olive oil. It took approximately three minutes to put together the dough. I then patted it into a tart pan, ready to go. The topping consists, first, of an anchovy-garlic sauce that is spread over the dough, and second, of onions tenderly cooked to melting perfection in olive oil flavored with thyme and bay. The final step is decorating the pie with anchovy fillets and black olives.

As I was cooking, I wondered about the connection between pizza and pissaladière, etymologywise. Did one arise from the other and pinch the name? Apparently not, at least according to the eminent French linguist Alain Rey, a founding father of the dictionary Le Robert, the bible of French lexicographers. He believes the two dishes arose at different times and in different places, based on a 10th-century document found in the cathedral in Gaetà, outside Naples, that mentions pizza. The first mention he finds of pissaladière dates from the 16th century and derives from the word pissala, or pissalat, denoting a paste made of small salted fish (in old Provençal, peis = fish and sala = salted).

Am I convinced? Maybe, maybe not. The resemblance between the words and the dishes is too compelling to believe that they have no connection. And wherever the two arose, Nice is but a hop-skip-and-a-jump from the Italian coast, and sea connections and commerce have thrived across the region since prehistoric times.

What is certain is that the word pissaladière derives from pissala, a product hard to find outside the Nice region. It is traditionally made by layering anchovies and baby sardines in a jar with salt and a mixture of herbs and spices between each layer. The jar is left to macerate for several weeks before the mixture is passed through a sieve to remove bones and scales. It is then conserved in a clean jar topped with olive oil.

For those living far from Nice, an approximation of pissala can be made by blending anchovy filets with garlic and olive oil. This takes about five minutes — easy as, well, pie. All in all, preparing the pissaladière took me an hour and 40 minutes, including the gentle cooking of the onions and the baking time. I was able to concoct it during the current brutal heatwave in Paris, and lived to tell the tale.

Served with a bottle of chilled rosé on the side, it goes down a treat.

This entry was posted in 4a. Savory Tarts and Tartines and tagged anchovies, olives, onions, pissaladiere, pizza, recette, recipe. Bookmark the permalink.