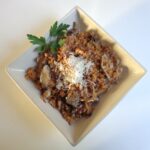 This unusual wild mushroom risotto is the creation of John O’Shea, the brilliant young British chef who presides over the kitchen at JJ Beaumarchais, a restaurant downstairs from my apartment. It is unusual first because instead of rice it uses épeautre, known in English variously as spelt or einkorn wheat, and second because, unlike most risottos, the ingredients are cooked separately and combined only just before serving.

There’s also secret ingredient that lends a certain — and fabulous — je ne sais quoi. I couldn’t identify it when I first tasted this risotto in early November. But I knew I had to have the recipe, which John was kind enough to share. And in case you’re already worrying about where to find épeautre, not to panic. He assures me that this dish may also be made with a traditional risotto rice, such as Arborio or Carnaroli.

So, here’s how he does it. First, he makes a broth, such as homemade chicken broth or, for vegetarians, homemade vegetable broth. Then he simmers the rice or épeautre in the broth until it is al dente. The next step is to clean the mushrooms. And, you might well ask, which mushrooms? John uses a combination — whatever is available in season — and he throws in some standard mushrooms as well. 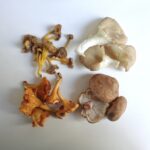 I made the dish three times last month, using a different combination of mushrooms each time. Pictured at right are four types I’ve tried. Going clockwise from the top left, they are in French, chanterelles, pleurotes, shitake and girolles. This may be a bit confusing, because what the French call girolles are called ‘chanterelles’ in English. But it doesn’t matter because you can use whatever is available in your area. I have also used the papery black mushrooms called trompettes de la mort (‘trumpets of death’), which despite their scary name are not poisonous and are indeed very popular over here.

To return to the recipe, the mushrooms are sautéd in olive oil until they give up and reabsorb their juices, with shallot and garlic added along the way. When everything is tender, the pan is deglazed with — wait for it, here comes the secret ingredient — white vermouth, such as Martini Blanc or Noilly Prat. As most risottos call for dry white wine, not vermouth, I might have balked at the idea had I not tasted the finished product before making it at home. Well, dear reader, the vermouth leaves a shadow of flavor that is frankly divine when married with the rustic grain and mushrooms.

As a finishing touch, John adds cream to the mushrooms and then combines them with the grain. He adds grated parmesan and a little chopped parsley, et voilà. That’s it.

I have served this risotto as a main course, preceded by smoked salmon and followed by salad and cheese, and as a side dish, in one case with roast chicken and in the other, at a more elaborate dinner, with rolled roast of duck and puréed cabbage (coming soon), preceded by dandelion salad with bacon and with walnut tart for dessert. However you may choose to serve the risotto, I can assure you your guests will appreciate it.