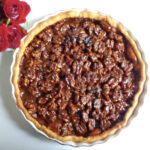 Walnut tart, a specialty of southwest France, is a favorite of mine in the autumn. The walnut pieces are bathed in a caramel sauce and then baked in a tender tart shell to produce a sweet, chewy confection — comfort food at its finest. This tart would make a nice innovation on Thanksgiving, and could add a festive touch on Christmas or New Years. With the holidays arriving, I wanted to share the recipe with you. There was only one problem…

…I had never made a walnut tart before. Why bother? The pastry shop at the corner made a luscious version that I could just pick up. I thought about it, though. For years I pestered the pastry chef to share his recipe. He declined. Then he sold the place and it was taken over by vegans, who by the way make delicious bread — but as there is no butter in their pastry, traditional walnut tart is not on the menu. So I turned to a friend.

Julia Watson is a writer, cookbook author and, more recently, a food blogger whom I met in Moscow when we were both posted there in the 1980s. She’s a remarkable cook, and was the first to turn me on to the pleasures of fresh herbs in Georgian cuisine. Although British, she spends a lot of time in southwest France. I tasted her walnut tart somewhere along the line, and when I started thinking about making it for this site, I asked her for the recipe. Which she generously supplied. It had been published some years back in an article she wrote for Gourmet magazine about evening farmers markets in the Dordogne.

Well, dear reader, I followed the instructions and the result was what we call in France a cauchemar en cuisine (the phrase — meaning ‘nightmare in the kitchen’ — was popularized by the chef Philippe Etchebest in his eponymous TV series, in which he rushes to help save the situation for hapless restauranteurs). The problem was the caramel, which is made by boiling up sugar and water. It refused to turn brown. So after boiling it for, say, about 20 minutes, I gave up, continued with the recipe and put the tart in to bake. 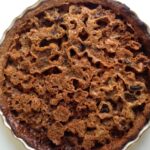 Can you imagine the slopes of Mount Etna after a volcanic eruption? This is how my tart came out of the oven, with hills and crannies that looked like solidified lava and were just as hard. I’d made the tart for a dinner party that evening, and my guests gamely agreed to try it. Not too bad, I guess, because they asked for more — although one remarked that he had never before seen a tart that looked like a lunar landscape.

While the tart was still in the oven, bubbling away like a witch’s cauldron, I phoned Julia in a panic. What had I done wrong? ‘Oh,’ she replied, ‘Gourmet changed my recipe in their tasting kitchen. Try using less water.’ Which I did on my second attempt. Success!

Now don’t be daunted by this story. Making a walnut tart is actually quick and remarkably easy, providing you get the proportions right. You begin by making a sweet tart shell (pâte sablée), which doesn’t need to be rolled out — you simply pat it into the tart pan. While the shell is chilling, you toast the walnuts, heat some cream and in a separate pot make the caramel. Once the caramel browns, you pour in the cream — this step is pretty spectacular, because it all boils up like a seething sea of, well, lava. Then you add a little butter, stir in the walnuts, transfer the filling to the shell and pop the tart in the oven.

The tart is best served warm, perhaps with some cream on the side. In the cooler months, it makes a perfect ending to a festive meal. 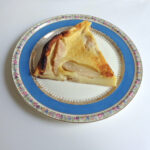 By the way, another autumn dessert I love is pear clafoutis, which I posted back in 2012, when this site was just getting started. I made it again recently and updated the recipe with a better photo. If you’d like to try it, the recipe is here.