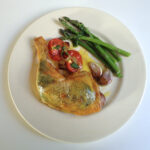 This dish of roast chicken with a garlicky basil sauce tucked under the skin was inspired by my friend Valérie, a superlative cook. It’s a spin-off from a venerable ancestor, poularde en demi-deuil, or ‘chicken in half mourning’, a specialty of Lyon in which truffle slices are slipped under the skin. As truffles are expensive and hard to come by, Valérie often substitutes herbal sauces. One of her favorites is pistou, the Provençal version of pesto.

In fact, pistou is the same as Italy’s pesto genevese minus the pine nuts. To make it you just need a bunch of fresh basil, a garlic clove, a little grated parmesan, olive oil and a blender. While the oven is heating, you create a pocket for the sauce and slip it beneath the chicken skin. If you like, you can add chopped tomatoes and shallots and/or whole garlic cloves to the roasting pan. The result is succulent and ultra flavorful.

Valérie says this dish is not her invention, but I’ve never encountered it before. A quick search of the web turned up nothing identical — plenty of chicken-and-pistou dishes, but none with the sauce inside the chicken. On the other hand, there are many, many recipes for poularde (or poulet) en demi-deuil, one of the triumphs of French gastronomy.

That dish, which rose to fame in the 1930s in the eponymous Lyon restaurant of La Mère Brazier, France’s first female three-star chef, takes its name from the contrast between the black of the truffle slices and the white of a creamy sauce bathing the chicken — half mourning. But Mother Brazier didn’t invent it. She learned how to make it from one of her precursors in Lyon, La Mère Filloux, whose clients never asked for anything else according to Curnonsky, an early 20th century food critic known as the Prince of Gastronomy.

I would love to try my hand one day at demi-deuil, in which a whole chicken is poached with veggies for an hour and a half before the insertion of the truffle slices, then allowed to cool overnight and poached for 90 minutes more the next day. A sauce of broth, cream and wine completes the recipe. As that’s kind of a major production — and I don’t have any truffles at hand — I’ll settle for poulet au pistou for the time being.