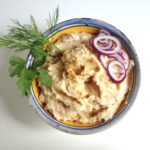 The idea for this Mediterranean-style dip came my way the other day when a friend brought me a packet of beautiful dried white broad beans. I wanted to use them quickly, but they were so large that I feared they might be intimidating if served whole. So I cooked them to tenderness and puréed them with lemon juice, olive oil, garlic and a dash of cumin. As my friends and I appreciate spice, I added a crushed cayenne pepper as well.

There were smiles all around when I served the dip at cocktail hour, accompanied by warm pita triangles and some veggie sticks. It is similar to hummus but lighter because there is little olive oil and no tahini, the rich sesame paste that is puréed with chick peas to make hummus. It’s the sort of dip you might find in Provence, or along the French coast near the Spanish border, or (let me dream) in a Greek taverna on a sparkling cove.

My first experience with Mediterranean-style beans was in the 1990s when a Lebanese friend in Paris served me ful medames, made of darker beans but with essentially the same flavorings as white bean dip. I was so blown away by this zingy, earthy dish that I had to have the recipe — and made it at home the next day. Ful medames, in which the beans are cooked to mouth-watering tenderness but not puréed, is actually an ancient Egyptian dish described as ‘probably as old as the Pharoahs’ by Claudia Roden in her Book of Middle Eastern Food. The dish is now served across much of the Arab world.

Like ful medames, the white bean dip offered today is packed with nutrients and also vegan. But the main thing is that it’s a crowd pleaser that can get any festive occasion off to a good start. And as I discovered, leftover dip will last a while if refrigerated. A snack to have on hand while waiting for the day when we can travel to Greece…