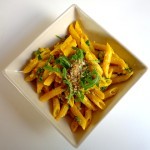 Is it alchemy? Is it art? Each of the four main ingredients in this knock-out dish — saffron, arugula, walnuts and parmesan — has so much personality that one could easily imagine it knocking out the other three. And yet, through some sort of culinary magic, they blend to imbue the pasta with a flavor that is slightly exotic and, as my student Louise would say, simply divine. Add a little cream, a little salt, and presto. A spectacular and unusual dish.

This pasta works well in the summer, when it can stand alone as a main dish, preceded or followed by tomatoes or greens in salad with plenty of fresh herbs. But it’s also great by the fireside in winter — a warming and satisfying first course, perhaps followed by roasted game or veggies. It hails from the outskirts of Rome, where my friend Tony discovered it in a small roadside stand, virtually a shack. There was no menu — they brought whatever the chef decided to make that day. Once Tony had tasted this pasta he kept going back for more, in hopes that they would bring it again and again…

This week Tony came over to France from London and we took a little day trip to Reims, in Champagne country, only 45 minutes from Paris by train. After visiting the soaring Reims cathedral, where the kings of France were crowned (and for which Marc Chagall created the magnificent stained-glass windows behind the altar), we repaired to a local bistro for lunch. Again, alchemy and art were at work in my first course of ravioli filled with … snails. Very French, very local. This was followed by a bouchée de la reine, or queen’s mouthful — a pastry shell filled with chunks of veal, chicken and locally made ham in a sauce flavored with Champagne. I love sampling local dishes when moving about in France, and may just try to replicate one of the above for this site in due course. By the way, the restaurant was Le Pré Champenois, unpretentious but hardly a roadside eatery.

Other news: Plans for the Mallorca cooking workshop are moving forward and I hope to be able to provide full details in my next post two weeks from now. Briefly, the workshop will be held at a charming boutique hotel from April 23-30. French cooking classes will take place from 4-6 p.m. Monday through Friday — the rest of the time participants will be free to explore the island. Please let me know if you are interested. Five people have already contacted me about taking part, and places are limited.