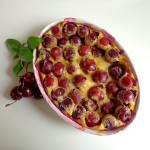 Cherry pie, cherry cobbler, cherry tart, cherry mousse, cherry soup, yes, but cherry clafoutis? Why such an odd word for one of France’s favorite homespun desserts, cherries baked in a batter of eggs, milk and sugar? Clafoutis (pronounced clah-foo-TEE) comes out of the oven all trembly and inviting. It hails from central France, and is a spring/summer staple in this country. Other clafoutis may come and go — there is a recipe for pear clafoutis here — but cherry clafoutis is the princess of this magnificently simple dessert.

I was curious about the origin of the word so looked it up in my Petit Robert, the prince of French dictionaries. Clafoutis derives from clafir, which in local patois means ‘to fill’. This in turn derives from the Latin phrase clavo figere, which is Greek to me. If any of you Latin scholars out there can shed some light on the meaning, please let us know. According to my Robert, the word became popular in the mid-19th century, which means that this dessert has been around for less than 200 years. Somehow I doubt that. It is a relative of flan, which dates back to the 12th century or earlier. What to do when the cherry tree is suddenly laden with fresh, lush fruit? Too much fruit for eating or even jam-making? Pop the cherries into a flan… 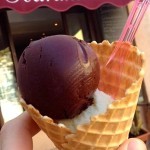 Now some news from Paris. A few days ago, a French-American couple launched a new ice cream shop named Scaramouche on a little street in Montmartre. The American in question is the writer Elizabeth Bard, author of two delightful memoirs with recipes — Lunch in Paris and the just-released Picnic in Provence — that tell the story of her encounter and love affair with the Frenchman in question, Gwendal Auffret. While living in Provence, they launched an artisanal ice cream making business using only the best ingredients, with a creative range of local flavors (rosemary, olive oil and pine nuts; lavender; geranium petals and crushed pistachios; saffron, etc.) as well as more typical flavors like chocolate and vanilla. In 2013 they opened their first Scaramouche shop, in the village of Cereste, and the next year were named to Trip Advisor’s list of the top 10 ice cream shops in France. This success has propelled them to Paris. If you’d like to stop by for a taste, the shop is at 22 Rue la Vieuville, beneath Sacré Coeur in the 18th arrondissement.

And finally, here’s something so new that I can only give a few details now, with more to come in the weeks ahead. It looks quite likely that I will be teaching a cooking workshop in April at an enchanting boutique hotel on the Spanish island of Mallorca. I am still hammering out the details with the hotel’s British owners, but the tentative plan is to hold the workshop during the week of April 24-May 1. Participants would arrive on a Sunday, have afternoon cooking classes from Monday to Friday, and leave on the following Sunday. During the day, they would be free to explore the island and its fabulous beaches, or to lounge beside the hotel’s lovely pool. The price, which is still being worked out, would be equivalent to the cost of seven nights in a mid-range hotel in Paris, London or New York. Included would be breakfast every day, five dinners with wine, and the five 2-hour cooking lessons with yours truly. Non-participating spouses/partners/friends may come along for a very modest additional price. French cooking on a Spanish island? If you like the idea and think you might come, please let me know via the Contact page. This plan will take off if there is sufficient interest. We can accommodate up to eight students.