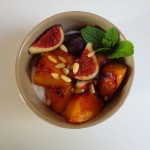 Peaches and fresh figs are piled irresistibly on market stands at this time of year. So I didn’t resist … and combined them to create a late summer dessert. What makes it special is that the peaches are caramelized before being mixed with the figs and nestled on a mound of creamy fromage blanc (or Greek yogurt). Pine nuts and mint add a Mediterranean touch. It’s light, it’s bright — perfect for savoring the last warm days before autumn sets in.

The inspiration for this recipe came in part from my recent trip to California. While visiting the ranch of my brother’s friends Tom and Gayle — a magnificent place in the rolling foothills of the Sierra Nevada — I decided to make a tart, and used the fruit that happened to be on hand. Peaches and figs. The result turned out to be a crowd-pleaser. If you’d like to try that, go to the Plum Tart recipe on this site and, instead of plums, arrange peach slices in a outer ring and place quartered figs in the middle. 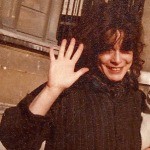 Now then. This week marks the start of Year Three of The Everyday French Chef. And not only that, it marks the 40th anniversary of my arrival in France. Ah oui, mes amis. I arrived here in 1974, when Paris was less crowded and far less globalized. It was a different kind of place, with romance in the air, and of course I was much younger. What can I say? Thanks for the delicious memories. It’s been a great ride.

Because it is an anniversary week, I was particularly touched to discover that a new food blogger, Allison Stubbings of Classic Taste, picked up an Everyday French Chef recipe a few days ago for her first food post. She chose Mussel and Saffron Soup, which went up on this site in March 2013. Her idea is to record a year of learning to cook great French dishes by consulting a range of cookbooks and blogs. It was fun to read about her struggles with the mussels, and her ultimate success with the dish. So — welcome, Allison.