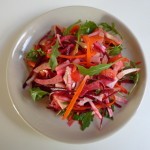 There’s nothing subversive about this ‘underground salad’. It’s simply made of veggies that grow beneath the earth. Carrots, finocchio, turnips, parsnips, celeriac, beets, radishes — it’s up to you to choose. Add a few leaves of arugula or another tender green, and you have a dish that’s lovely to behold as well as crunchily pleasant to eat. I owe the inspiration for this salad to my Parisian friend Jocelyne, an aspiring vegan, and to the menu of a cool Italian restaurant where I dined in San Diego, La Buona Forchetta.

Yes, that’s San Diego, California. It was the last stop on our summer road trip and, as promised in July, I’ll now write a few words about California cuisine. Fresh, inventive and modern, with accents from both France and Mexico, it was a revelation for both me and my teenage daughter, although her highlights would be different from mine (see below). 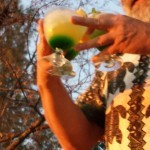 Some of my favorites (with recipes to follow in the weeks ahead): my brother’s gazpacho; a fig, caramelized onion and goat cheese pizza to die for at Greens in San Francisco; Tom’s mint margueritas at his ranch in the foothills of the Sierra Nevada; the world’s best barbecued ribs at Everett & Jones in Oakland; melt-in-your-mouth skirt steak gorditas (like mini tacos) at The Cliffs north of Pismo Beach; incredible sushi (served warm) at Sugarfish in Santa Monica; and the amazing fish tacos at Duke’s in Malibu. I should mention that many of these meals were enjoyed at places overlooking the Pacific, which added a little je-ne-sais-quoi to the flavors. Just delightful. 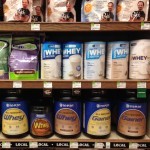 Of course, we also encountered unusual (from a French point of view) food items, which I immortalized in a series of photos. Among them: organic peanut butter balls, packaged protein smoothies and a lot of whey (whatever that is). My daughter’s favorite was a crepe called S’Mores — topped with toasted marshmallows, graham crackers and chocolate kisses at a place called Crepevine in Berkeley. (I took a pass on that.) 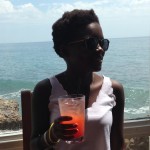 Would we love to go back? Absolutely, although not in the immediate future. My pocketbook needs time to recover first. But I will be experimenting through the gray Paris winter with ideas gleaned along the sunny Pacific Rim. And I may just make myself a mint marguerita. Happy cooking!