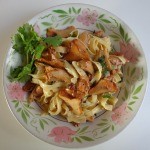 With the autumn mushroom season bursting forth in all its glorious bounty, there’s only one thing to do: go hunting. In my case, given the dearth of forests in Paris, this means heading down to the local street market. What I found this week was an irresistible haul of girolles — chanterelles. Richly golden, thickly succulent, they make a perfect match for pasta. Snip in some herbs, add a little cream and voilà! Dinner is ready. 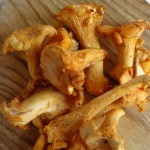 Now then, about chanterelles. They come in different shapes and sizes and, to be honest, I prefer the beautifully large and fleshy, yellow-orange variety (shown at right). According to Le Petit Robert, my favorite French dictionary, the word girolles dates back to the 16th century. It derives from girer, to turn, and indeed the little ridges beneath the caps appear to rotate slightly. 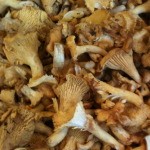 Chanterelles sometimes come in a thinner shape, but the flavor can be just as fine. At French markets these thinner mushrooms (shown at left) are, curiously, known as chanterelles, and not girolles. They have the advantage of being less expensive. But whenever possible I’d prefer to pay more and get the heftier, golden-orange variety — with an important caveat. If you live in Europe, it’s best to ask about the provenance of the chanterelles before making a purchase. I avoid those from countries that were exposed to heavy doses of radiation from Chernobyl, even though the accident there took place 28 years ago.

Whichever variety you choose, you will find your kitchen enveloped in a delicious woodsy-fruity odor when you begin to cook your chanterelles. A perfect prelude to a fine meal. This is the third recipe with girolles on this site (after pan-seared scallops and a wild mushroom first course), and I expect it won’t be the last. Happy cooking!