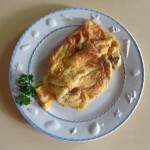 One can make a fine omelet with any kind of mushrooms, but the combination of eggs with porcinis — cèpes in French — is out of this world. Which is why so many French food lovers go into the forests in the autumn. The first cèpes of the season have already begun appearing near my place in Burgundy, and thanks to my generous neighbors Bernard and Mireille I was able to make an omelet the other day with porcinis they had just gathered.

The recipe appears to be simple — slice the mushrooms, fry them in a little olive oil, mix up the eggs, make the omelet and add the cèpes. But appearances can be deceiving. I received a stern lecture from Mireille on why I should never cook cèpes the way I’ve always done, with a little garlic and parsley. ‘No, no, no!’ she said. ‘Ask any real mushroom lovers and they will tell you that garlic overpowers the flavor of the cèpes.’ And the flavor is indeed sublime. So I did it her way, and was not disappointed. She gave me a couple more tips, which I have included in the recipe. Happy cooking!