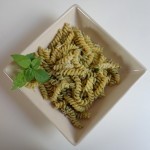 We’re having another heatwave here in Paris — reminding us that it’s still summer, even though the kids have gone back to school. So here’s one of my favorite summer dishes: spiral pasta with pistou, the French version of pesto. It makes a perfect meal for hot summer evenings, accompanied by a chilled rosé. And here’s a plus — the dish is so easy to prepare that you can make a lot of it, and use the leftovers to create a colorful pasta salad.

Now for some site news. Many new people have been signing up for email subscriptions and joining me on Facebook since I announced last week that I would give a copy of Ann Mah’s forthcoming Mastering the Art of French Eating to the person who sends the most new subscribers to the site by Sept. 30. Many thanks for that! But, but, but — none of you has yet provided a list of the people you’ve sent to the site. I would suggest that you keep a running tally and notify me once a week so that I can keep up with you. Ann’s book, which has received rave advance reviews and is published by Viking Penguin, will come out on Sept. 26, and she has offered to sign a copy for the winner.

Meanwhile, a team from the French-German television channel Arte dropped by on Wednesday to film me making cranberry sauce for a new series about food and art. The first program, which will air in October, takes as its centerpiece Manet’s Dejeuner sur l’herbe (‘Picnic on the Grass’). The second, in November, is centered around Norman Rockwell’s Freedom From Want, in which a 1950s-style American family is enjoying a Thanksgiving dinner. So The Everyday French Chef will be part of that broadcast. The shoot was really fun (see photo below of the producer, Isabelle, and cameraman, Julien). And the best is yet to come. In a couple of weeks I will be heading down to Vonnas, north of Lyon, to meet the three-star chef Georges Blanc and be filmed enjoying his version of an American Thanksgiving dinner! A great way to celebrate this site’s first anniversary. 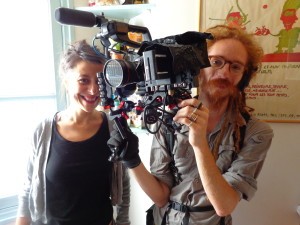