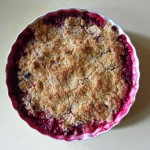 We are heading into the home stretch toward the first anniversary of this French culinary site, and as it turns out the most popular category of recipes is desserts. So it seems fitting that I should offer you one of my favorite crumbles, a blend of the great fruits of midsummer. Easy to make, lovely to present and, if I may say so, absolutely scrumptious. At least that was my impression when my guests finished every last bit…

In the last couple of months, this site has been picking up steam, with an increasing number of requests for recipes — and comment from yours truly — from other sites and periodicals around the world. The Everyday French Chef has been featured recently on a culinary site in Australia (All About Cuisines), a British print and web magazine (French Entrée) and a French blog that offers recipes along with a basket of ingredients to prepare them (Foodette). And next week I will be filmed in my kitchen by the French-German television station Arte (more on that later).

Despite this success, the number of subscribers remains far below my target of 10,000 — the number needed, I’ve been told, for publishers to take interest in a cookbook project. So, as the Sept. 10 anniversary approaches, I’d like to propose a little contest — with a great prize. My friend and fellow blogger Ann Mah is about to bring out her long-awaited book Mastering the Art of French Eating. I will offer a free to copy to the person who brings the most new subscribers to this site by the end of September.

Ann’s book has been winning fabulous advance reviews from writers like Patricia Wells, Peter Mayle and Diane Johnson. Her book will be released on Sept. 26. So get out the tom-toms and tell your friends and family about The Everyday French Chef — ‘the modern cook’s guide to creating fabulous French food without spending hours in the kitchen’. They may subscribe via email by clicking on the little envelope at the top of the site, or through the Everyday French Chef page on Facebook. Keep a tally of the people you know who subscribe, and let me know about it via the Contact page at the top of this site. The winner will be announced on Sept. 30.