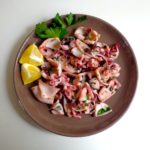 We just returned from a week at the shore in southwest France, where the beaches are vast, the waves are impressive and the food is fantastic. One of the specialties I most love in that corner of the world is squid grilled with garlic and parsley. The squid are cooked using a method the French call aller-retour, or back and forth, a phrase most commonly seen on round-trip tickets. In culinary usage, the phrase means that the food is placed on an extremely hot grill and cooked very quickly on one side (aller) and then the other (retour).

This dish, a Basque specialty, can be found on both sides of the nearby border with Spain, and similar versions abound around the Mediterranean. It is popular at cocktail hour, generally served with a crisp white wine, and may also be served as a starter or a main course. The key is obtaining the right kind of squid — neither too small nor too large — and that can be tricky, even in France, where the name changes according to region.

This dish can be prepared in just 10 minutes if you have the squid cleaned by the fishmonger before getting started. You have only to chop the squid, garlic and parsley, heat your skillet and perform a quick aller-retour. When researching this post, I learned that there’s a season for squid, which begins in August and runs through February, at least over here. The height of the season is September…