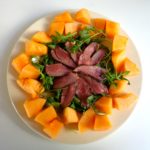 When the French say melon, they are generally referring to one particular type of melon. It is small and round, about 4-6 inches (10-15 cm) in diameter, with dark green stripes over a pale exterior and an intoxicatingly sweet orange interior. It is similar to cantaloupe, but more fragrant. The most highly reputed come from Cavaillon, in Provence, while the most widely sold are called Charentais. All pair delightfully with duck.

The season for melon (pronounced muh-LOH, with a nasal twang at the end) begins in July and runs into the autumn, so we were in mid-season last weekend when I created this dish. A friend and I were spending a couple of sultry days in the Burgundy countryside. We had grilled a duck breast on the barbecue the evening before, and there was enough left over to compose a lovely plate. The melon perfectly complemented the duck.

The combination is not encountered frequently here. Melon is most often paired with cured ham, for example jambon de Bayonne, from the southwest, or prosciutto, imported from Italy. In decades past, another common starter was melon au porto — the melon was cut in half, and the cavity was filled with sweet port wine.  This has faded from fashion, which is a shame because it was fantastic (watch this space). 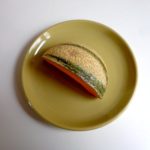 It is a mystery why the melons over here are so much sweeter than those found in the States. Perhaps because the sun in southern France is more intense, or maybe there’s another reason. If you have an idea, please let us know.

Meantime, here’s something that may interest  readers in Paris. A friend of mine, the author Ann Mah, is sponsoring an event called Food Lovers For Hillary that will be held from 3 to 6 p.m. on Sunday, Sept. 18. Major stars of the culinary firmament will be in attendance — Patricia Wells, David Lebovitz, Alexander Lobrano and Dorie Greenspan. Each will offer a prize, such as a cooking class or a market tour, to be bid for in a silent auction. The aim of the event is to raise money for Hillary Clinton, so the price of entry is a $100 donation. It is, in the opinion of this everyday French chef, a worthy cause.