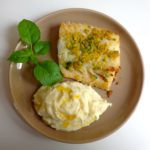 ‘I do not cook, I practice art.’ These words, pronounced by the divine actress Stéphane Audran toward the end of the film Babette’s Feast, give voice to the feelings of many of us when we enter the kitchen. Such were my feelings when I set out to duplicate a dish I had recently tasted at a nearby bistro. The dish? Cod crusted with pistachios, and served alongside a creamy purée of potatoes flavored with horseradish. Simply divine…

The bistro was Gustibus, a small place on the Rue St-Sébastien around the corner from me. I had walked past it many times without taking special note. But then a friend visiting from abroad convinced me to try it. The room is warm and intimate, the owner smiling and gregarious. Nadia is also a genius in the kitchen, where she and her husband prepare meals inspired by the cuisine of their native northern Italy.

In this recipe — my interpretation, as Nadia did not reveal her secrets — pistachios are peeled and crushed with a rolling pin, then patted onto the fish. The cod is lightly floured and pan-seared in olive oil. The horseradish purée is a variation on standard mashed potatoes, also very quick and easy to prepare. This versatile purée could accompany many other dishes, from meat or poultry to a vegetarian spread. 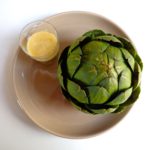 Over the last couple of weeks, I have been on a cooking spree, revisiting dishes already on the site in order to update their photos. The first is artichauts vinaigrette, or artichokes with mustard vinaigrette. With artichokes appearing in markets now, it seemed a seasonally appropriate choice. It also allowed me to revisit my recipe for the vinaigrette, an attentive reader having noticed a discrepancy between the amount of oil called for in the recipe and a different amount in the accompanying video. This has now been rectified — thank you, reader! — but the bottom line is, for a sharper sauce use less oil. The French standard version would be with more oil for a satiny, flavorful sauce that doesn’t bite. 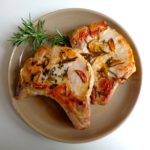 The second revisited recipe is porc grillé aux herbes de Provence, or grilled pork chops with rosemary and thyme. With summer just around the corner, this is another seasonal dish, as the chops are best when grilled on the barbecue. But lacking a barbecue, you can grill them in a skillet, as I did on a rainy day in Paris. The combination of garlic and fresh herbs produces an aroma that will draw family or guests to the kitchen to see what’s cooking. 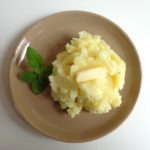 I have also added a bistro classic that was long overdue — écrasé de pommes de terre, or smashed potatoes. This dish, which has become popular on menus in recent years, is actually a throwback to the time when potatoes were roughly crushed with a fork instead of being puréed with a blender, as is usually done in France. These potatoes marry well with just about everything.

Whether you prefer your potatoes smashed, puréed with horseradish or in any other form is not important. For, as they say in Latin, de gustibus non disputatam — there is no accounting for taste. This is the phrase from which Nadia and her husband plucked the name of their bistro. Another translation: enjoy, enjoy.