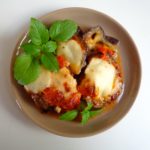 It’s been a long rainy spring. We needed a hint of summer. The solution? Eggplant gratin with homemade tomato sauce, topped with bubbly cheese. This is a lighter version of a familiar dish, also known as eggplant parmesan, because the eggplant slices are steamed instead of fried before going into the gratin dish. It’s fun to assemble — the whole family can get into the act. Add a sprig of fresh basil and voilà. Summer has arrived.

It’s not just the rain this spring, it’s the general climate in France. They have a word for it over here that translates just fine into English: morose. Strikes plus cold gray weather. I have been waiting for a sunny day to go tend my garden in Burgundy. The sun made a rare appearance this week but I couldn’t make the trip because workers are blockading the country’s oil refineries, leading to a gasoline shortage. I had enough in the tank to get down there, but not enough to come back. Meanwhile, it’s tomato planting time…

If this sounds a bit depressing, it is, so let me move on to other subjects. After I posted the cod with pistachios recipe two weeks ago, I realized I had left out the vermouth-flavored sauce that was served with the original version I’d enjoyed at Gustibus, a neighborhood bistro. If you’d like to try it, make a Béchamel and add two tablespoons white vermouth. Spoon around — not over — the fish just before serving.

Meantime, after seeing the cod with pistachios post, a friend sent me a similar recipe — cod with a hazelnut crust. Thank you, Mary Bartlett! It’s apparently a big favorite in Oregon. So here it is:

Cut the cod filet into four portions and season each with salt and pepper. Melt the butter in a shallow dish. Mix the panko crumbs and the nuts together in a small bowl.

Dip the cod in the butter and then in the crumb and nut mixture to coat completely.

Arrange the fish on a small baking sheet and chill for 30 minutes.

Heat the oven to 425. Bake the fish until the crust is lightly browned and the center is opaque (about 15minutes.)