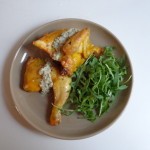 Take a moment to consider the humble walnut. It is said to have health enhancing qualities, and even life extending properties, possibly because it contains antioxidants. Now let’s consider the Georgians and their beautiful, mountainous land on the shores of the Black Sea — the land where Jason is said to have gone in search of the golden fleece. Is it because walnuts play such a large part in the cuisine of the Georgians that are among the longest-lived people on earth? They combine walnuts with garlic, spices and herbs to make a spectacular sauce that they serve often, sometimes with grilled chicken, as in this recipe.

I served this to guests the other day, using the small, young chicken known as the coquelet in France. Tried it out on my daughter first. Her reaction? ‘Trop bon!’ (French kidspeak for ‘awesome’). The sauce is made ahead of time, the chicken roasted at high temperature to crispy succulence, and when you bring it to the table be prepared for oohs and aahs. This same sauce works brilliantly on cooked vegetables like green beans or spinach. I plan to serve it next week on roast duck. But is it French? Mais oui, now it is. It’s been a star of my Parisian table for decades.

When considering the great cuisines of the world — Indian, Thai, Persian, Chinese, Italian and, of course, French — mention is rarely made of Georgian cooking. This will undoubtedly change over time through globalization. In the meantime, one woman has done quite a lot to make Georgian cuisine accessible to everyday chefs in the West. She is Anya von Bremzen, whose masterful Please to the Table, which came out in 1990, contains recipes from all the republics of the former USSR.

I had the pleasure of interviewing Anya recently about her new book, Mastering the Art of Soviet Cooking, which despite its title is not a cookbook but rather a fascinating history of the Soviet Union viewed through the lens of food. If you’d like to see the interview, it’s here on a French literary site called Paris Writers News.

One more thing on the literary front: I’ve just begun a new blog on the craft of writing that may be of interest to the readers/writers among you. As a journalist and writer with nearly four decades of facing the blank page on a daily basis, I decided to share some thoughts. The first post, Is This a True Story, considers the ethics of changing the names of people portrayed in a memoir. If you read it, please add your thoughts. I’d love to see them.

And by the way, it’s spring. Happy cooking!