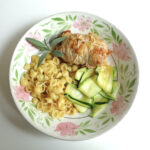 Paupiettes de veau, a classic bistro dish, are veal scallops stuffed with a savory meat filling. They are rarely made from scratch in French homes as they can be bought already stuffed from the butcher — and merely need to be braised before serving. But as I discovered, they’re fun to make and easier than one might think. The veal is folder around ground meat flavored with onion, garlic and herbs, then barded with bacon and tied up with string.

The filling is essentially a meatball. A mixture of ground veal and ground pork is generally used in France, but my recipe uses only pork, as ground veal can be hard to find. The best pork to use is high-quality sausage, such as saucisse de Toulouse in France or Italian-style sausages elsewhere. You can simply cut through the sausage casing and extract the filling, which has enough fat to ensure that you get succulent meatballs. 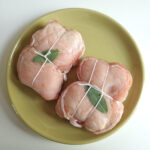 Preparation of paupiettes de veau begins by pounding the veal scallops to ensure they are thin enough to wrap around the stuffing. Tying them up is simple — it’s like wrapping a birthday present. Once stuffed, the paupiettes are browned on all sides and then braised in white wine or, sometimes, rosé.

From that point on there are many variations. Cream may be added to the sauce, or not. Likewise diced tomatoes or sliced mushooms. A version called paupiettes de veau zingara includes julienned carrots, mushrooms, ham, tongue and truffles(!), in a heady sauce flavored with Madeira.

In bistros, paupiettes are often served with pasta, mashed potatoes or rice. At home, you can be more inventive. Veggie purées marry well. Possibilities include purée of finocchio, carrots, zucchini, celeriac or sweet potatoes. A gratin — of potatoes, zucchini or eggplant — would also go well. So would seasonal veggies, such as green beans in summer or zucchini ribbons, as shown in the photo above (to make them, use a vegetable peeler to cut the ribbons, then steam or blanch for 1 minute only).

This post will most likely be my last for a while, as I am heading to California for vacation later this month. But The Everyday French Chef will be back in August. Until then, here’s wishing you a happy summer and …