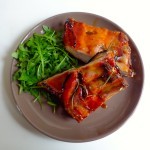 Barbecued ribs in France? When I first arrived in Paris, I spent a long time with The Joy of Cooking trying to create American-style barbecue sauce from scratch. It wasn’t easy. Just tracking down the Worcestershire sauce could take an entire afternoon. In the end, I mastered the recipe (which proved useful when I moved to Moscow in the ’80s). But I also discovered French-style ribs with a marinade of honey, balsamic vinegar, garlic and rosemary.

These ribs are oven roasted, meaning you can make them year round and don’t need to have outdoor cooking facilities. They are slow cooked (relatively) so that they remain succulent even as they crisp. If you want to add some heat to the sauce, you can add a little cayenne pepper. The result is very French, with zingy accents from Provence.

Meantime, American barbecue is at last having it’s day in Paris. David Lebovitz, the father of all food bloggers, recently wrote about a Texas barbecue joint called The Beast that’s not far from where I live. And Alexander Lobrano wrote a wrap-up of several barbecue places for The New York Times, all of which sound great. I’m looking forward to trying them.

For my money, though, the best barbecue sauce in the world comes from Oakland, California. Spicy and smoky, it’s sold by a restaurant called Everett and Jones that also features live blues on Saturday night. I discovered this thanks to my brother, a longtime Oakland resident and authority on fine food. Every now and then he sends me a jar of that dynamite sauce. But in between times, barbecued ribs, French style, are mighty fine.