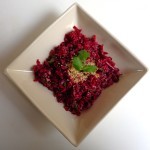 Behold the humble beet. Part of our culinary heritage since the time of the ancient Greeks, it is an inexpensive, low-calorie and nutrition-packed food. These days it’s getting a makeover in Paris, where it is served in chic restaurants in new varieties — from pale yellow to pink-and-white striped — sliced thin and added raw to salads. The familiar deep red beet has been around since the Middle Ages, when a salad such as this one may have been served.

The salad combines grated beets with garlic, walnuts and cilantro — a great combination, with echoes of Georgia, the land by the Black Sea where the legendary Jason and his argonauts sought the golden fleece. The French touch comes from the addition of olive oil and balsamic vinegar. If you’ve never tried this combination, prepare to be surprised.

Georgia is in traditional beet territory, which covered a wide swath of Europe from Germany to Russia. When the beet came to France, it got a boost from Napoleon, who responded to a British blockade of French ports by imposing a ban on sugar imported from British colonies in the Caribbean — and initiated cultivation of the sugar beet.

When I was a child in the States, beets were served warm as a side dish, without any particular sauce. They were far from my favorite food. The revelation came when I arrived in France, where beets bathed in mustardy vinaigrette are a star of assiette de crudités, the starter in which heaps of different veggies appear side by side on an inviting plate.

The return of beets to food fashion was signaled some years back by the appearance of beet chips in packets of root vegetable chips far tastier than the standard potato chip. I expect I may well see beets in one form or another tonight, when I’m being taken to a reputedly fabulous Paris restaurant called KGB (no connection to the former Soviet Union). Will let you know all about it next week. In the meantime, my friend Ann Mah’s latest entry on her food and travel blog describes three hot new Paris restaurants that you may want to put on your to-try list for the next time you’re in town. They may well serve beets too.