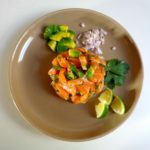 Tomorrow is April Fool’s Day, an event marked in France by pranks known as poissons d’avril, or ‘April fish’. So this seemed an appropriate time to post a fish recipe, all the more so as spring has now sprung with a vengeance in Paris, with warm-weather dishes sprouting on bistro menus like precocious darling buds of May. Salmon tartare is one such dish — light and fresh, its flavor enhanced with avocado, fresh herbs and lime juice.

I had originally planned to make tartare de thon, or tuna tartare, but fresh tuna was not available when I went to the market. It’s not only not the tuna season, my fishmonger informed me, but tuna fishing is actually banned in France for most of the year — the tuna we see in the markets of Paris has apparently been imported from the Maldives. Not a problem, however, as fresh salmon is easily obtainable. The key word here being fresh, as this is the absolute requirement for serving fish raw, as in sushi, or a tartare.

Tartares of all sorts are quite popular over here, most notably steak tartare, most often made of beef these days but formerly made of horse meat. I tend to prefer the fish variety. Sea bass, cod, sardines and sea scallops are also used. A fish tartare is most often served as a starter, but can also be a main dish, accompanied by anything from salad to (I’m not kidding, I’ve seen it) a deep pile of fries. When a friend and I tried a new fish restaurant last week, Fichon, raw fish was the only thing on the menu. They say it’s trendy.

Getting back to poissons d’avril, the April 1 prank-playing custom dates back at least to the Middle Ages in France. Its origins are obscure, being variously said to have involved popes, kings and competing versions of the calendar. The tradition is alive and well today, with schoolchildren taping paper cut-outs of fish on each other’s back and gleefully shouting ‘Poisson d’Avril!‘ at the victim. Older kids make up tall tales that they spin to each other, and sometimes the media get into the act. In 1991, for example, the main French television network, TF1, reported that the third story of the Eiffel Tower had been removed for repairs — and showed images of a truncated tower, with bystanders commenting that they hoped the repairs wouldn’t last too long…

As for the origins of the term tartare, which indicates the food is raw, opinions diverge here too. It attributed by some to an alleged custom of Mongol warriors of placing raw meat under their saddles and riding until it was tender, at which point it was consumed, and by others to the fact that steak tartare was formerly served with sauce tartare — the French version of which contains mayonnaise, capers, chopped pickles and fresh herbs.

Sauce tartare is often served with fried fish in France, but not with fish tartare — the flavors of a dish like tartare de saumon being so delightful that they need no enhancing.

This entry was posted in 5. Fish and Shellfish and tagged poisson d'avril, recette, recipe, salmon, saumon, tartare. Bookmark the permalink.