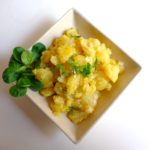 You may say po-TAY-to, I may say po-TAH-to, but the French say “apples of the earth” (pommes de terre), perhaps an indication of their esteem for the humble spud. And French potato salad, simple and earthy, has a taste all its own. Unlike American potato salad, it has no mayonnaise. Unlike the German version, it leaves out the bacon. No, the French bathe potatoes in a vinaigrette while still warm, add chopped shallots and herbs — et voilà.

This rustic culinary masterpiece was first presented to me shortly after I arrived in Paris as a student, served on the mixed veggie plate known as an assiette de crudités. It was surprisingly pungent, but also soothing. Over the years friends served it in many variations — warm or cold, with parsley or chives (or both), with dill or chervil or tarragon. Usually the vinaigrette contains Dijon mustard. When it does not, the dish becomes pommes à l’huile and is often served beside oil-cured herring.

Given the global renown of a culinary invention associated with this country — French fries — it is hard to imagine that pommes de terre were once so controversial that they were actually banned by the French Parliament. They were thought to cause leprosy and other ailments. This was back in 1748, before the Revolution and also before a certain Antoine-Augustin Parmentier revolutionized French thinking on the potato.

Captured by the Germans during the Seven Years War, Parmentier was forced to eat thin potato soup — and didn’t fall ill or die. Upon his return to Paris, he used his background as a pharmacist to conduct experiments with the potato. The more convinced he became of the potato’s nutritional value, the more creative he became in his struggle to persuade a dubious public. He planted a potato patch and had it guarded by day but not by night, inciting Parisians, who thought the plants must be valuable, to steal them — and try them. At one point he invited luminaries including Benjamin Franklin to a potato dinner.

By this time, potatoes — which had been brought to Europe from Peru by the Spanish conquistadors in the 1500s — were popular in Ireland, England and Germany, and had been brought back across the Atlantic to North America. The French finally lifted their ban during a period of famine in the late 1700s, even growing potatoes in the Tuileries Gardens to feed the populace. Parmentier today is viewed as a national hero. I live not far from Avenue Parmentier, a large Paris thoroughfare. Various dishes are named in his honor, most notably hachis parmentier, or ground meat topped by mashed potatoes.

Getting back to French potato salad, there are now many variations on the basic recipe. When researching this blog post, I came across versions including pickles, cockles, goat cheese, honey, eggs, olives and even algae. Sure, you can put seaweed in your potato salad. But as an everyday French chef, I’ll choose the traditional recipe every time. It will soon be the season for new potatoes — the very best choice for this salad.