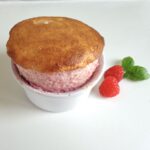 If you’ve never experienced a raspberry soufflé, it’s like tasting warm, fluffy, raspberry-flavored air. Sweet, light and ephemeral. And the good news is that this elegant dessert is remarkably easy to make. I’m not an expert on dessert soufflés, but when I saw Michel Guérard, one of France’s most venerated chefs, whip up a couple of small raspberry soufflés during a television feature, I knew I had to try to make them myself. Instant success!

Michel Guérard is one of the fathers of nouvelle cuisine, the lighter, fresher version of French cooking that became a sensation in the 1970s. He’s had three stars in the Michelin restaurant guide for more than 40 years, a rare distinction. He’s a genial man — in the France 2 broadcast, he held a freshly picked raspberry in his hand and said it felt like caressing a woman. Back at his kitchen, he showed viewers drawings he’d made in cocoa for Queen Elizabeth when she visited Versailles on her first trip to France.

But Michel Guérard was careful in the broadcast not to give away all of his secrets. For example, he didn’t say how much sugar to add to the soufflé batter and how much to use for coating the cups. I had to wing it. He also omitted to say how to make the sugar adhere to the cups. With butter? With egg white? I asked around — it’s butter.

Another thing. The soufflés go into the oven for just 4-5 minutes — so that the inside stays creamy, he said. I found that astoundingly brief, but guess what? The recipe works. I’ve made it three times now, to resounding applause. And it takes no more than 10 minutes to prepare. You purée the raspberries and push the purée through a sieve to remove the seeds, you add sugar and an egg yolk, you butter and sugar your soufflé cups, you beat three egg whites, you fold the whites and the raspberry mixture together and — here’s the master coup — when you pile the mixture into the cups you even it off with the edge of a spatula. In the oven, they pop up ever so nicely. And they are a treat to eat.

This entry was posted in Desserts and tagged framboises, raspberry, recette, recipe, soufflé. Bookmark the permalink.