Stuffed tomatoes are one of the glories of French country cooking. This is peasant food at its finest, and fillings differ considerably. The traditional recipe, which hails from Provence, uses sausage meat, often in combination with beef or veal, and flavored with onion, garlic, herbes de Provence and fresh parsley or basil. In a lighter, vegetarian/vegan version, the tomatoes are stuffed with a filling similar to ratatouille, with a little bulghur added for heft.

It’s not known who first had the brilliant idea of stuffing veggies with meat, rice or another filling, but the practice goes back a long way, at least to the ancient Greeks. Related dishes include stuffed vine leaves, stuffed zucchini, stuffed eggplant, stuffed cabbage leaves (coming soon), stuffed sweet peppers and even stuffed zucchini flowers. 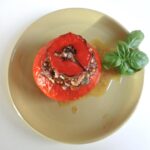 Fillings for tomatoes have evolved over the years in France. In the old days, leftover meat from boiled dishes such as pot au feu was often chopped to create the filling. Roast beef or chicken were also used. These days recipes generally call for ground meat. For the pork, use a high-quality sausage, such as Italian sausage or saucisse de Toulouse, simply removing the meat from its casing. 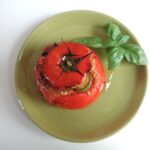 For the veggie filling, you can follow the recipe given here — with eggplant, zucchini, onions and garlic — or use your imagination. I’ve seen recipes that use combinations including potatoes, carrots, mushrooms, corn, pine nuts, raisins, goat cheese or olives. In all of these, the tomato pulp is also incorporated.

Both the meat and the veggie fillings presented here are flavored with herbes de Provence — a comination of dried thyme, rosemary and other herbs, for example marjoram, savory or basil. Snipped fresh herbs such as parsley or basil are generally added. If you like a bit of bite, you can also include cayenne.

There are many other French versions of stuffed tomatoes. In one, tomatoes au nid (‘tomatoes in the nest’), the tomatoes are hollowed out and an egg cracked into the center before being roasted. In another, tomates farcies à la reine, the tomatoes are stuffed with poached chicken, mushrooms — and sometimes truffles — in a cream sauce. In cold versions, the tomatoes may be stuffed with tuna or with crème fraîche and fresh herbs.

In other words, you can create the stuffed tomatoes of your choice. And with summer looming, this is a great time to try your hand at this classic French dish.