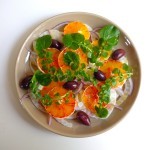 One recent Sunday during a visit to England, I was lucky enough to be invited to lunch in the picturesque town of Sevenoaks, in Kent south of London. My friends served me a spectacular meal, beginning with a salad of ruby-streaked blood oranges piled on thinly sliced finocchio and red onion, and scattered with Kalamata olives and watercress. Blood oranges would still be in season when I got home to France. I had to have the recipe.

For most of recent history, it was believed in France that the words ‘British’ and ‘cuisine’ were a contradiction in terms. Not true! At least, not anymore. My friend Penny, a remarkable cook, got the lunch off to a flying start with homemade tarama, light and tangy and bearing no relation to the store-bought variety, served with a crisp white wine.

We repaired to the table for the salad, which was followed by a piquant Georgian beef stew, pumpkin roasted with red pepper flakes and fresh sage, and cabbage steamed to delicate tenderness. The menu reflects Penny’s many travels abroad, including long stays in Russia and various forays to the Middle East. I have made the stew myself — using the same recipe, from Anya von Bremzen’s Please to the Table, a compendium of the cuisine of the former Soviet Union — but never managed the same meltingly rich results.

The main course was followed by an assortment of English cheeses, including tangy Lord of the Hundreds, made of unpasteurized ewe’s milk and a serious rival to France’s brebis Basque. (The cheese apparently got its name from a Saxon lord who held 100 parcels of land.) We took a break to watch Philadelphia Story, but the meal wasn’t over. After the movie we returned to the table for upside-down rhubarb cake with fresh ginger. Fabulous!

With spring just around the corner, I will not try to replicate the pumpkin dish just now — but when autumn comes, watch this space. I may have a go at the rhubarb cake, however. The bottom line is that English cuisine, like French, has lapped up influences from around the world for the palate’s delight. And after all, it’s faster to get from Paris to London now — just over two hours on the Eurostar — than to reach Marseille. So I, for one, plan to integrate the English style into my everyday French repertoire. You too?