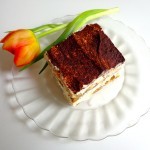 Can you imagine that tiramisu, the ubiquitous feather-light confection, did not exist half a century ago? It certainly was nowhere to be found in Paris when I arrived in the 1970s, having only just been invented (apparently), although its origins are in dispute. What cannot be contested is that this wonderful dessert of sweetened cheese layered with ladyfingers dipped in coffee is not only a crowd pleaser, but easy and fun to prepare.

Tiramisu is said to hail from the town of Treviso, not far from Venice, and to have been invented somewhere around 1969 — although other stories about its invention date it back to the 17th century. The word tiramisù means ‘pull me up’ or ‘pick me up’ in Italian, but it might as well mean ‘cheer me up’. A great dessert for a rainy winter’s day.

I experimented with various methods before settling on the one in this recipe. Mascarpone — Italian cream cheese — is mixed with egg yolks, sugar and flavoring. The egg whites are beaten and folded in. Ladyfingers are dipped in strong coffee and layered in a deep pan, with the creamy mixture spread over it. Then unsweetened cocoa is sprinkled on top for a delightful mix of flavors. A word of warning: once the tiramisu is ready, it needs to set for several hours, so be sure to leave yourself plenty of time.

But is it French? Yes, in the sense that it is served in every Italian bistro in Paris, and many French restaurants as well. This recipe originated with a request from my daughter, who was clamoring for me to make it. Over the last few weeks, she and her friends have had regular tasting sessions as I tried one method after another. They preferred the version flavored with vanilla — while adult guests definitely liked the version flavored with grappa. Another flavoring choice is sweet Marsala wine, from the Trapani region of Sicily.

Where did you first taste tiramisu? I would venture to guess that it was not in Italy. For this dessert streaked across the globe so fast that we can now all claim it as our own.