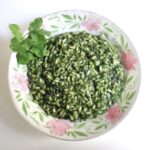 I discovered spinach risotto many years ago at a dinner party in Venice. Our host, a genial fellow named Giorgio, was chatting me up, so I followed him into the kitchen and watched as he chopped and sautéd and ladled and stirred. Distracted by his charm, I didn’t know what he was making until he brought the dish to the table. ‘Risotto agli spinaci’, he announced with a flourish. One earthy, creamy, tangy mouthful and I was in heaven. Pure bliss.

Was it the ambience that made that evening so special? This was back in 1981 during the Carnevale, a magical time what with mist rising off the canals and masked Venetians saluting each other in the town’s bars and squares. When the faces weren’t masked, they looked straight out of the 16th century portraits in the Accademia. You could turn a corner and hear someone singing an aria through an open window. Nureyev was performing at La Fenice, and with luck you could run into him at a corner cafe. All senses were heightened. So tasting Giorgio’s spectacular risotto only added to my mood of intoxication.

The next morning I phoned him up to ask for the recipe. What was the secret? The ingredients were simple — onion, spinach, rice, wine, broth, butter and parmesan — and yet they combined to produce a sublimely subtle dish. Giorgio said he’d get back to me, but it took him a couple of months to oblige. By that time I was back in Paris and had almost forgotten about risotto. Then a letter arrived in the post.

The letter was divided into sections. Between Part I (‘Political’) and Part IV (‘Personal’) came Part III (‘Recipe for the risotto’). It called for well-cleaned spinach, rice (‘two handfuls per person’) and noted that the risotto must be thick — ‘it’s not a soup, one must be able to eat it with a fork’. I bought the ingredients, came home and made it. Success.

Shortly after receiving Giorgio’s letter, I learned that I have family roots in 16th century Venice, which could help explain why I took such a liking to risotto. It is a signature dish of Venice and comes in many other varieties, one of the best of which is made with the ink of a squid. On this site you can find recipes for risotto with radicchio, asparagus and peas, saffron, morel mushrooms, pumpkin and thyme, lobster and wild mushrooms.

I owe this all to Giorgio. I never saw him again, yet I’ve saved his letter all these years. His closing words were very touching. ‘Needless to say, I’d like to see you,’ he wrote, ‘and wish it could be soon. Who knows? Take care of yourself. Be kissed. Giorgio.’