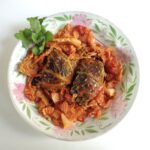 The French love stuffed cabbage in winter. They serve it two ways — with meatballs rolled up in individual cabbage leaves and, impressively, as a reconstituted whole cabbage with the stuffing inserted between the leaves. This recipe, which uses the far easier first method, puts a French twist on a dish my grandmother used to serve, with flavors redolent of her Jewish Ukrainian roots.

Prepartion takes time, but it’s worth the effort. The first step is blanching the outer leaves of a large head of cabbage. In Eastern Europe, white cabbage is generally used, but the French prefer dark green Savoy cabbage, which has the advantage of being easier to handle. The next step is making meatballs and rolling them up in the blanched leaves. A sauce is then made of the shredded inner leaves of the cabbage, onion, garlic, tomatoes and broth. Red wine vinegar and sugar are added to produce a sweet-and-sour taste. The rolls are cooked in the sauce in two stages, first on the stovetop and then in the oven.

One thing that differentiates this version from more typical French recipes is the use of ground beef on its own rather than a mixture of beef, pork and/or veal. Another is the absence of bacon, which is often used in France to bard individual stuffed cabbage leaves that are then tied up with string. And then there’s the sauce, which in France rarely includes tomato and is never sweet and sour (at least I’ve never encountered it that way).

What makes this recipe more French than my grandmother’s version is the use of herbes de Provence, France’s go-to mixture of dried rosemary, thyme, savory and oregano. Preparation of the sauce is also different, as the veggies are sautéd in olive oil before the cabbage rolls are added. Grandma Anne simply boiled everything all together.

If you’d like to experiement with the whole cabbage version, typical of the rugged Auvergne region of central France, there are two ways to go about it. In the first, large blanched cabbage leaves are used to line a pot. The meat stuffing and more cabbage leaves are then layered in, with the large leaves folded over the top to form a globe. In a more elaborate version, a whole cabbage is boiled and, when cool, the center leaves are removed, the outer leaves are pried apart, the stuffing is inserted and the cabbage is formed back into a globe and tied up with string or crépine, a lacy pork membrane.

Now for a little history. In Ukraine, stuffed cabbage rolls are known as holubtsi, or little doves, because they are thought to resemble birds in a nest. In Yiddish, they are known as holishkes. I never heard this name in my family because my grandparents only spoke Yiddish in front of the kinder when they didn’t want us to understand. But my grandma — who was born in the States in the 1890s but conceived in Ukraine, then part of the Russian empire, before her family departed — would have known them this way.

According to Wikipedia, stuffed cabbage rolls have been part of Jewish cuisine for 2,000 years. Preparation varied according to region. Syrian Jews added cinnamon, while Persian Jews added dill and mint. The dish was often served on Simchat Torah, an early autumn holiday marking the end of the yearlong reading of the Torah scrolls and the start of a new cycle (rolls perhaps because the year was rolling around again?).

But Jewish versions are just one incarnation of a dish that has been served for centuries across much of Europe as well as the Near East and North Africa. Cabbage rolls may be stuffed with rice or another grain, mushrooms, potato, crushed walnuts or eggs, with or without meat. They may be served with sour cream on top, alongside or in the sauce (but not in Jewish families). In the Nordic countries, they are served with lingonberry jam on the side. There are apparently even Chinese, Vietnamese and Japanese versions.

In France wine is often included in the sauce for stuffed cabbage rolls, but I prefer my grandmother’s recipe without it. Yet nothing says the dish cannot be accompanied by wine — in fact, in this country, that would be a travesty. I’d recommend a smooth red, for example a Bordeaux such as a Médoc or a Côtes du Rhone. For starters, you could serve beet salad with walnuts, winter salad with walnuts and pears or, if you’re feeling ambitious, homemade gravalax (which needs to be prepared one day in advance). For dessert, I’d suggest pears in red wine and cassis or sliced oranges with star anise.