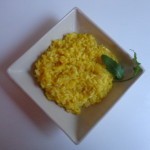 Risotto is one of the world’s great comfort foods, and this particular kind — with saffron — is one of my favorites. It makes a fine starter and works well as a side dish. I served it the other evening alongside rolled roast of duck with walnut sauce. Simple fare with a slightly sophisticated edge — and quite different from the relentlessly modern food one risks encountering these days at some of the reputedly hottest restaurants in Paris.

As regular readers of this blog already know, I am a big fan of Shaun Kelly and the creative cuisine he brought to the restaurant Au Passage — fresh, seasonal and invariably inventive. Shaun was preceded at Au Passage by another young Australian chef, James Henry, who went on in late 2012 to open a new place, Bones, also in the 11th arrondissement. It’s had great reviews, and I had high expectations when a friend and I went there last weekend. But, alas, we were disappointed — and not just because, after arriving at 8, we had to wait more than an hour for the first food to appear.

It was something we hadn’t ordered, a palate teaser of indeterminate nature. On the tiny plate, it looked like two mouthfuls of merguez (spicy sausage). But looks can be deceiving, as we discovered on tasting what turned out to be a mixture of sea urchin, grated carrot and botargo (salted mullet roe), encased in an unidentifiable wrapper. By 9:30, we were still waiting for the first course when the waitress appeared with a second palate teaser — two slices of barely cooked duck heart. “It looks like it’s still beating,” said my friend.

When at last the actual dinner appeared, the dishes were neither bad nor great. One combined asparagus, sea scallops and citrus fruit, another starred monkfish cheeks in broth. By the way, it’s a set menu with no choice possible except the main course. I chose veal, which came with mini artichokes and whipped cream — quite tasty. My friend had a microscopic serving of lamb with kidney (James Henry specializes in offal). This was followed by a clear-the-palate salty orange granita. We were more than ready to leave by 11 when they finally brought the dessert, which was — wait for it — jerusalem artichoke ice cream.

Now please don’t get me wrong. I’m all for inventive cuisine, but sometimes it feels like chefs are trying too hard to push the margins. It’s like they’ve forgotten that restaurant goers may enjoy creativity, but we are above all seeking a good meal. In addition, the restaurant was incredibly noisy, with a young crowd of (mainly) foreigners. Not surprising, as the French would not tolerate being made to wait 90 minutes for the first course.

Meantime, I just revisited Au Passage, which was as fabulous as ever although there is now a brand new chef. Ah oui, mes amis. Shaun Kelly has gone off to a new place, Yard, also in the 11th. Haven’t tried that one yet — it opened only this week — but when I do I’ll let you know. The new chef at Au Passage, an English friend of Shaun’s, is Edward Delling-Williams, and I’m delighted to report that he is maintaining that bistro’s fine tradition. Without recounting everything we tried, I’ll just say that the dish of cockles with bacon and salsify (an edible root popular in France) was to die for. So much so that I will attempt to replicate it for you in a future post. And in the meantime, happy cooking!