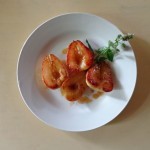 Today is the first day of the second year of The Everyday French Chef. Yes, my friends, it’s our first anniversary. When I started this adventure on Sept. 10, 2012, I had no idea how long it would last. But thanks to your support, I can now see that this is a site with a future. We passed 50,000 page views sometime back in August, and more people are signing up every day. Thank you! To celebrate the occasion, I am offering you a melt-in-the-mouth dessert that is perfect for this time of year and remarkably easy to prepare.

Heading into Year Two, I’ve made a few changes to the site, with a new category, Most Popular Recipes, leading the sidebar at the right of the page. I was very surprised to see that red onion tart — a recipe I invented one day when I wanted to make an onion tart and had only red onions on hand — was the all-time favorite. I plan to update this category about once a month. Next comes Recent Posts, where you can see the latest recipes, followed by my Favorite Food Blogs and a new item highlighting sites that have featured The Everyday French Chef via recipes, interviews or literary writing. Finally there are the Archives, where you can look back at what has been published month by month.

At the top of the sidebar are new icons allowing readers to follow The Everyday French Chef in any of four ways — by email, Facebook, Twitter or RSS. As you probably know, we are in the middle of a contest to see who can attract the most new subscribers to the site by Sept. 30. The prize is Ann Mah’s forthcoming Mastering the Art of French Eating, a Paris-based love story with recipes that has received rave reviews in advance of publication at the end of this month. Beneath the icons is a search bar that can help you find recipes and blog entries that have appeared previously on the site. You may also search for recipes using the drop-down menus in the black bar at the top of the site.

By the way, if there are recipes you’ve been longing to see that have not yet appeared, or if you have any suggestions for improving the site, or any thoughts at all to convey, please leave a comment at the bottom of this post.

As we enter this second year, I have decided to begin posting at a more leisurely pace. Recipes will henceforth appear once a week, on Fridays — instead of twice a week, as they have since November, or once a day, as they did for the first two months. In fact, at the beginning, I was posting several recipes a day, a feat that now seems hard to imagine! This change to a slower pace is partly to give me time to improve the overall quality of the site. At the beginning, lacking a camera, I was shooting pictures of the food with my iPhone, which produced less than perfect results. I am currently in the process of reshooting those dishes. If you take a look at some of the earliest recipes, you will find better images now.

I also want to give myself time for other projects, first and foremost the forthcoming publication of my new book, Desperate to Be a Housewife, about a globe-trotting journalist in search of a story with a happy ending. I expect the book to come out later this fall, and will keep you posted about that. In the meantime, happy cooking!

This entry was posted in Desserts and tagged caramel, pears, poires, recette, recipe. Bookmark the permalink.