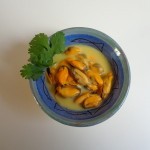 This is one of those knock-your-socks-off openings to a meal that will have your guests begging for the recipe. I served it on two occasions in the past couple of weeks and both friends said it was so delic… (oops, that’s the word you’re not supposed to use on your own cooking blog) that they wanted to try to make it at home right away. So here’s the recipe — mussels in a creamy sauce spiced with saffron or curry powder. Go for it.

This is my first once-a-week-on-Fridays post as we begin the second year of The Everyday French Chef. Even more people have signed up since Tuesday. Many thanks again for your support. For those of you planning to enter the contest to see how many new subscribers you can attract to the site, I need to warn you that one very active reader in New Zealand has already brought me eight new followers! Please send your tallies in to me using the Contact button at the top of this page. The contest ends on Sept. 30, and the prize is a signed copy of Ann Mah’s forthcoming Mastering the Art of French Eating.

In other news, the people at the French-German television channel Arte who are producing a new series on food and art — with an episode on Thanksgiving, for which I cooked cranberry sauce last week — have phoned up twice in the past couple of days. First they asked me to bring the cranberries with me next week when I go down to Vonnas for a Thanksgiving meal prepared by the three-star chef Georges Blanc. They want my humble sauce to sit on the table alongside food prepared by one of the greatest chefs in France. Well! My first thought was, good thing I froze the sauce instead of serving it at dinnertime. My second thought was, good grief, this is a bit intimidating. But then they called again yesterday and asked me to bring corn bread, too! The original plan was to serve corn bread prepared by a man described by Arte as the best baker in Paris — Christophe Vasseur of Du Pain et Des Idées. They will serve his version, but want to compare it with corn bread baked by a real American. That would be me. So now I am doubly intimidated, all the more so because I haven’t made corn bread since I was a kid back in Wisconsin. If any of you have recipes you would like to share, bring ’em on. I’ve got one week to perfect my technique before heading down to Vonnas…