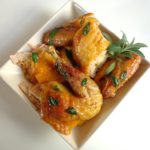 I first encountered this dish a couple of years ago at Yard, the restaurant opened by the Australian-born Shaun Kelly when he left his first Paris venture, Au Passage. The guinea hen was so deliciously succulent, its sauce of fresh sage sautéd in butter so richly satisfying, that I knew I had to try to recreate it at home. I would have called Shaun Kelly for advice, but he’s no longer at Yard and I couldn’t find him. Nonetheless, here it is.

The recipe is a cinch. The guinea hen is roasted in the oven — lacking an oven, you can cut it into pieces and sauté it on the stove top — and the bird is then bathed in its sauce. (By the way, lacking a guinea hen, you can use chicken.) The fresh sage is what makes the sauce so exceptional. Butter is melted to sizzling and the sage leaves are added until both they and the butter are starting to brown.

This combination hails from Tuscany, I believe, at least that’s where I first tasted it — as a sauce for cheese ravioli sprinkled with Parmesan. I was with friends dining at an outdoor trattoria, and we nearly jumped up to applaud. That’s how good it was. Since then, fresh sage has been part of my culinary repertoire. I grow it in my garden in Burgundy, and have a pot of it on my balcony in Paris. It appears in several recipes on this site — the Tuscany-style ravioli, a cheese omelet and a French-style pizza with bacon and sage.

Sage has been appreciated in France since the Middle Ages, not just for its flavor but also for its medicinal qualities. Used in an herbal tea, it was believed to increase longevity. The name of the herb itself — salvia in Latin and Italian — carries echoes of salvation. Louis XIV, the sun king, is said to have served it to his guests. For me, though, sage is hardly a royal plant. Its charm lies in its simplicity. Its musky fragrance rises up from the garden on a warm summer’s day as butterflies flit among its flowers and silver-green leaves. And when cooked, it fills the house with its delectable aroma.

As for the guinea hen, it is quite common here in France, where it is raised by country folk along with their chickens and geese. My Burgundy neighbors always have a few in their yard, the birds’ white-spotted black feathers looking straight out of an African painting. Which isn’t surprising, since guinea fowl originated in Africa, and their French name, pintade, derives from the Portuguese pintada, meaning “painted”.

Now, back to Shaun Kelly. He served the guinea hen alongside veggies drizzled with a fabulous sauce of cream and horseradish. I would love to get that recipe too — if only I could find him. If you happen to know where he is these days, please get in touch.