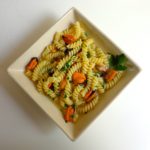 It is surprising, in our globalized world, that we can still travel only a short distance and find ourselves in a whole new foodosphere. I recently had the pleasure of visiting Naples. The first night, at a joint straight out of a Mastroianni-Loren movie, I was served pizza with sausage and friarielli, aka broccoli rabe, which is virtually unfindable in Paris. The last day, I encountered a simple but scrumptious dish of pasta, mussels and pecorino.

The place was Pizzeria Osteria Manfredi, on a picturesque street around the corner from our hotel. We had dined there the previous evening and were so impressed that we came back for lunch. The place was crammed with Italians enjoying fresh seafood dishes — unsurprisingly, as the bistro lies about a ten minute walk up a hill from the Mediterranean. On the menu, the dish was identified as scialatielli cozze e pecorino. I recognized cozze — mussels — but had no idea about the scialatielli, which turned out to be a rustic fresh pasta that is typical along the Amalfi coast.

The dish arrived, the pasta lying tousled in a broth fragrant with plump mussels, and as soon as I tasted it I knew I had to try to recreate it at home. Not a problem, as it is quite similar to pasta alle vongole, or pasta with clams, which we enjoy now and again on Sundays when I’ve been to the market. The mussels are steamed open in wine and garlic, the pasta is cooked al dente, and they are combined at the end with a sprinkling of parsley and pecorino. As scialatielli are not readily available in Paris, I substituted spiraled girandole. In fact, any pasta would work well.

As for the mussels, did you know they have a season? In fact it’s just beginning, running from May to December, in France at least, as I learned this week from a TV feature on the start of the harvest off the Normandy coast. This was news to me, as I had always assumed that mussel season coincided with oyster season, which runs from September to April — the months with an ‘r’ in the name, as the saying goes over here. So the plumpest, tastiest mussels will be coming onto the market now. Go for it!