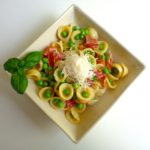 One of the pleasures of spring is fresh peas, and one of my favorite ways to serve them is in pasta with dry-cured ham and cream. The flavors marry delightfully, and the dish takes only moments to prepare. The only problem this spring, with farmers markets closed in France, has been getting hold of the peas. I found some the other day at an improvised veggie stand set up by chef Rodolphe Paquin of Le Repaire de Cartouche.

My pasta of choice for this dish is orecchiette — ‘little ears’ — which cup nicely around the peas. But you can use any pasta you have on hand — penne, fusilli, farfale, conchiglie, pipe rigate, etc. For the ham, I prefer a dry-cured variety, such as proscuitto or jambon de Bayonne. Other recipes call for cubed baked ham. Choose whichever you like.

Preparation takes less than half an hour if you start with peas in the pod, and even less if you use frozen peas. You can put a pot of water on to boil while you’re shelling the peas. When the water boils, add the pasta, slice up the ham, grate some parmesan and, just before the pasta is ready, throw in the peas. After draining the pasta and peas, you heat the cream to bubbling. Then everything is combined. Simplissimo! 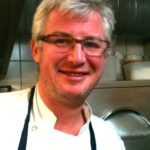 Back to Rodolphe Paquin, a genial fellow and one of my favorite chefs (I interviewed him a few years back — you can read the interview here). Like every restaurateur in France, he had to close eight weeks ago when the lockdown started, taking a hit to his bottom line. But restaurants are allowed to sell food for take-out or home delivery. Monsieur Paquin is currently offering a three-course take-out menu at lunchtime — his fresh pea soup is a knock-out — and also began selling top-quality produce that he receives from his supplier.

The back-door veggie stand at Le Repaire de Cartouche is as magnificent as a painting. I neglected to take a photo the other day, which I regret. Monsieur Paquin proudly presides over rosy white-tipped radishes, asparagus spears in shades of green, white and violet, spring carrots bunched with their fronds attached, perky heads of lettuce, lush purple garlic, spring onions, plump strawberries, sturdy rhubarb stalks — he’s got it all. Also on offer are his homemade terrines, goat cheeses, thick country bread and fresh flowers. A couple weeks ago he had lilacs. Now the peonies have arrived.

Of course, it isn’t cheap, and I am hugely looking forward to the reopening of the markets next week. The French lockdown ends (partially) on Monday, with most stores allowed to reopen as well as the markets. But restaurants and cafés will stay shuttered until early June, if not longer. Beaches are also still off limits, and we can travel no farther than 100 kilometers (60 miles) from home. Happily, no one has declared a ban on home cooking.

So gather your ingredients, chill a bottle of crisp rosé and liven up your spring by trying this recipe of pasta with fresh peas. Guaranteed to cheer you up.