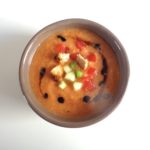 Sumer is icumen in… Yes, summer’s on its way, and with it gazpacho season. This flavor-packed chilled soup, which arrived in France from Spain, has many variants — including in spelling and pronunciation. The standard ingredients are tomatoes, cucumber, green pepper, garlic, dried bread, olive oil, vinegar, salt and pepper. My brother’s very excellent Californian version also includes spices: cumin, cinnamon and cayenne.

Of course it’s best to wait for red, ripe tomatoes before embarking on gazpacho. They’re already on the market here in Paris, imported from Italy and Spain. And we’ve been having a heat wave. So I made some the other day — very simple, providing you have a blender — and my lunch guests couldn’t have been more delighted. As garnish I added small cubes of cuke, tomato and pepper, along with little croutons and a swirl of balsamic.

I was curious, however, to know why ‘gazpacho’ is spelled ‘gaspacho’ in French. According to Le Grand Larousse Gastronomique, the dish originated in Seville, the capital of Andalusia (spelled Andalucia in Spanish, Andalousie in French). In most countries it retains the Spanish spelling, with a ‘z’, but in Spain this ‘z’ is not pronounced as a ‘z’. ‘Gazpacho’ is spoken, lispingly, as gath-PA-cho in most of Spain, and as gass-PA-cho in the south, including Seville. In France it retains the ‘s’ sound.

Research into the French spelling turned up nothing conclusive, so I will offer an explanation: a ‘z’ would change the pronunciation. The French word for natural gas, for example, is ‘gaz’, pronounced GAHZ. To retain the ‘s’ sound, the French had to change the spelling when the soup crossed the Pyrenees. This being France, the soup is of course pronounced differently anyway, with the accent on the last syllable: gass-pa-CHO.

From a cook’s point of view, this is all academic. What matters is the sublime mixture of flavors in this soup, which has been adapted to culinary styles around the world. I first made gazpacho when working as a substitute chef at Moosewood, an American pioneer in healthy natural cuisine. This was in the ’70s in Ithaca, New York, and gazpacho was already part of the American culinary repertoire.

Upon moving to Paris, I was delighted to find that gazpacho was popular here, too. French recipes tend to stick close to the Spanish original, as does the one in this post.

I first tasted my brother’s version a few summers back when we visited the California ranch of friends of his. It was a sunny, hot, lazy day, my daughter and I were in the pool, Bruce disappeared into the kitchen and emerged with beautiful soup — spicy and topped with avocado bits. I’ve included his version in the recipe.

Bruce is also responsible for me starting this post with a phrase from a medieval English round known as the ‘Cuckoo Song’. When very young, he made a water painting of a singing cuckoo with that phrase across the top. It was so lovely that my mother framed and hung it. Little did she know that her number one son would grow up to be an artist.

So with summer a-comin’ in, and the cuckoo starting to sing (and with my apologies for the mixed metaphor), go gather ye tomatoes while ye may, for gazpacho season is upon us.

This entry was posted in 2. Soups and tagged gazpacho, recette, recipe, seville, vegan. Bookmark the permalink.