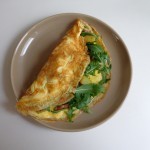 I wanted to give you a great recipe for Valentine’s Day, and this is what I came up with. It’s a delightful brunch dish when preceded by a glass of champagne — and can also make a light supper with a minimum of fuss in the kitchen, leaving time for other pleasures. I’ve taken some liberties with the traditional recipe, adding arugula to the basic bonne femme combination of bacon and potatoes in order to create a more modern flavor.

The omelet isn’t the only thing that’s new today. I’m happy to report that a short story I wrote has been published on the site Leite’s Culinaria as a pre-Valentine’s Day special. Don’t be misled by the title they used. It’s a surprising cross-cultural tale of seduction originally titled Spicy. I hope you enjoy it.

Meantime, if you’re looking for the ultimate Valentine’s Day dessert, I’d like to direct you to another site, Joy of Baking, where the red velvet cake — a Georgia specialty I discovered last summer in Atlanta — is just out of this world. I learned about this site at the recent cooking conference in New York, and will return to that subject one of these days soon. Happy cooking!