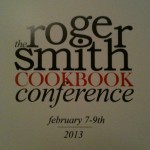 This is the question nobody wanted to ask out loud at the Roger Smith Cookbook Conference, a gathering of cookbook writers, editors, publishers, agents, food bloggers and food historians that has just concluded in New York. But it was lurking during two days of panel discussions as the people in attendance tried to figure out whether cookbooks have a future – or whether other (digital) means of obtaining recipes, from blogs and ebooks to mobile apps and online video, are making cookbooks into a relic of the past.

Here are a few key points:

* Everyone’s getting recipes online, even people who still use cookbooks. Okay, we already knew that. But now it appears that the younger generation is bypassing ‘old’ new media like blogs and going directly to You Tube for recipes. In other words, video is the next big thing.

* You want to write a cookbook? Don’t expect to make money. The size of advances has plummeted as the book publishing industry suffers from online competition. And despite the fact that cookbooks have resisted better than other categories of books, fewer are selling than in the past. So profits decline right down the line – for publishers, agents, authors and booksellers.

* 24 percent of all cookbooks published today are ebooks, and that figure stands to increase as time goes on. This was from a study by Bowker Market Research that also found that cookbooks in the form of apps for phones and tablets were doing slightly better than ebook cookbooks in 2012.

Of course, this being a cookbook conference, the bottom line here was that we still love cookbooks. You can do with them what you cannot easily do with digital media – write in them, dog-ear them, read them from cover to cover, enjoy them as literary works, etc.

There is much, much more to report from the conference – information of interest to foodies everywhere! – and I plan to blog about it once I get back to Paris. In the meantime, I welcome your thoughts on the matter. Please use the Comment form below.

And watch this space…

7 Responses to Are cookbooks finished?