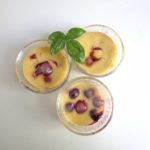 It’s cherry season in France, so when guests came the other night I served mini cherry cheesecakes made with goat cheese. A surprise and a delight! A surprise because I invented the recipe. This is a rare event. Most of the dishes on this site are French classics that I reinterpret in the everyday chef style — simple and modern. And a delight because the goat cheese lends a delicate edge to a dessert that’s both light and deeply flavorful.

And how did I come to create this confection? I’d originally planned to make a cherry cheesecake using sheep cheese from a recipe I’d spotted on French TV one day when I tuned in early for the news and a cooking program was running. But when I checked out the particulars, the recipe was complicated, used ingredients that are hard to find outside of France and — the killer — had a crust. After two months of lockdown and serious noshing, I wanted to make a dessert that was light. So I decided to experiment on my guests with a crustless version. Reader, they loved it.

The secret to success for this recipe is to bake the mini cheesecakes in the French bain-marie style — the batter is poured into little soufflé cups that are set in a recipient of hot water before going into the oven. This water-surround method (bain = bath) is used in French cuisine, either in the oven or on the stove top, for everything from crème caramel and chocolate mendiants to terrines and scrambled eggs. But, I wondered, why ‘marie‘?

I was surprised and delighted to learn that the bain-marie is thought to be named after a woman alchemist known as Marie the Jewess, aka Marie the Prophetess, aka Marie the Divine, who lived in Greco-Roman Egypt in or around the 3rd century AD. The method she used for gently heating mercury or sulphur water was later adopted for culinary purposes. In the case of the mini cheesecakes, the water bath protects the edges, which remain as tender as the cherry-filled center.

Speaking of cherries, and with an abundance available at the moment, a reader wrote in this week to ask whether it was safe to eat cherries in brandy that had been prepared a few years earlier because she had heard that cherry pits are poisonous. Could the poison seep into the brandy? Happily I was able to reply that it’s perfectly safe — provided you do not actually crush and chew the pit, which contains a chemical that turns into cyanide when ingested by humans. I did a little research online to find the answer, although I already knew from long personal experience that cherries in brandy improve with age and confer no ill effects other than a possible hangover if one overindulges…

And speaking of readers, The Everyday French Chef recently received an unexpected accolade from a celebrated chef in the United States. Rich Lee, the new executive chef at Antoine’s in New Orleans, who is in the process of updating the restaurant’s 180-year-old menu with newer recipes for modern palates, wrote in to say that the site has been an inspiration. I was, once again, surprised and delighted! Thanks, Rich.