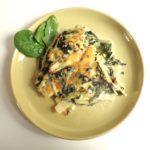 Swiss chard makes a beautiful gratin that is as packed with nutrients as it is with flavor. I made the gratin this week on Bastille Day, on which I will say more later. My first question, as I was preparing the dish, was: Why did it take me so long to discover Swiss chard? Not until I moved to France did I encounter this wonderful vegetable. My second question was: Since there’s nothing Swiss about it, how did Swiss chard get its name?

Research turned up a couple of theories on how the name arose. One is that it was first described by a Swiss botanist, even though it is not native to Switzerland. Another is that ‘Swiss’ got added to ‘chard’ in the 19th century to distinguish it from what was then called ‘French chard’, i.e. spinach. But while the two leafy green vegetables have similarities, they are from different botanical families — as chard is in fact related to the beet.

And indeed, the veggie’s name in French reflects this connection. Or should I say names. Chard is known here as both blettes and bettes, the latter very close to the name for beet: betterave, or literally ‘root of beet’. And the wide stalk in the middle is known as carde, which helps explain the ‘chard’ part of ‘Swiss chard’. (Making matters more complicated, another name in French for the same vegetable is poirée, which apparently derives from purée because chard was used in earlier centuries to make a thick soup, and which is confusing because of its closeness to poireau, or leek, another animal entirely.)

But getting back to the gratin, it is quick and simple to prepare. The chard is sliced, boiled until tender, then mixed with cream, a little garlic and grated cheese before being popped into the oven for half an hour. What emerges is a golden, bubbly dish that can be served on its own as a light meal, or as a side to accompany meat, poultry, fish or grains.

While my gratin was in the oven, I was watching the Bastille Day ceremonies on TV. The traditional military parade down the Champs-Elysées before huge crowds was scrapped this year because of the virus, and instead the forces presented their arms before President Macron at the Place de la Concorde in a smaller but deeply moving event. There was not a dry eye in the house — mine, or at the reviewing stand — when doctors, nurses and hospital workers were called to join the men and women in uniform standing at attention.

Recognition of the heroic efforts of this civilian medical corps was a moment of national pride, and for me it brought to mind the song by Josephine Baker: J’ai deux amours, mon pays et Paris — ‘I have two loves, my country and Paris’. I was born as an American, but I’ve spent most of my adult life in France, and in fact am now a citizen of both countries. I love my first, even in the era of the very stable genius in the White House, but am proud of my second, where we have now returned to near normalcy thanks to the population’s cooperation with sensible government efforts to combat the pandemic.

As a backdrop to the ceremonies, a giant red-white-and-blue poster was hung outside the National Assembly, just across the Seine from the reviewing stand. Une nation engagée, unie et solidaire, it proclaimed. Rough translation: ‘A nation of commitment, unity and solidarity’. This interesting tweak to the national motto — Liberty, Equality, Fraternity — perfectly encapsulated the attitude of the French during the health crisis. We were locked down for two months, and the vast majority of the population obeyed the rules.

Beyond party politics, the French were united in commitment to each other’s health — witness the nationwide clapping from balconies every evening — and the government showed its solidarity by granting unemployment benefits to people who couldn’t go to work during the lockdown. Nobody lost their health insurance (take that, Donald). And now, as we head into what is expected to be a brutal economic downturn, a new prime minister is negotating with employers and unions on how best to cushion the shock.

I had the gratin for lunch, and in the evening my friend Nancy came over for a combined Independence Day/Bastille Day dinner since we had both missed celebrating the Fourth of July this year. The food was more American than French — guacamole and corn chips followed by barbecued chicken and potato salad, with a red-white-and-blue dessert of vanilla and raspberry ice cream with cherries, blueberries and crème de cassis on top. As I planted mini American flags in the ice cream — a gift someone gave me years ago — I thought to myself that I should try to get hold of some mini French flags as well.

I have two loves — my country and Paris.

The Everyday French Chef will be on vacation in late July, returning with a new post on August 14.