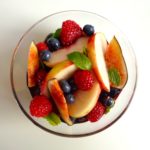 Fresh summer fruit piled into dessert cups with a splash of crème de cassis makes a lovely way to end a meal. Add a smattering of mint leaves, and you have a dish that is both sophisticated and simple to prepare. You can use whatever soft fruit happens to be available. For example, nectarines, fresh figs, raspberries and blueberries, as shown in the photo. Earlier this summer I used cherries, blueberries and peaches, and won applause.

And now it’s time for a confession. I meant to post this recipe last week on my normal schedule of every other Friday. But I was on vacation in Sète, in the south of France, where the white sand beaches stretch for miles and the living is easy — so easy I forgot all about it. On the other hand, the trip was a culinary adventure as it allowed me to get acquainted with various dishes that are specific to the region, most of them involving seafood.

Sète, which lies southwest of Montpellier, about halfway between Marseille and the Spanish border, is a major Mediterranean fishing port. Canals slice through the town, which has the sea on one side and a huge saltwater pond on the other. Products in abundance in the town’s fabulous markets include octopus, mussels and oysters, and these all feature in the local cuisine.

Sète is perhaps most famous for a dish called teille sètoise — a pie of octopus bathed in a spicy tomato sauce and encased in a doughy crust. The ingredients include saffron and Frontignan, a sweet wine produced in the village down the road. I tried this once and have to admit I am not a huge fan, but the locals seem to love it. There are bakeries scattered around town that make nothing else.

First prize for local cuisine — in my opinion — goes to piste de moules, which is served in small dishes at cocktail hour. My friend Serge, a writer who lives in Sète about six months a year, makes a dynamite version. The mussels are opened over a hot flame, removed from their shells and bathed for a couple of hours in a marinade of olive oil, garlic and hot pepper. He may have a secret ingredient or two but I am still waiting for him to send me the recipe. Watch this space.

The third local specialty I tried was stuffed mussels — stuffed not with the usual breadcrumbs and garlic but with sausage meat! I found the idea peculiar, but was convinced to try them by another friend who goes often to Sète. Well, after tasting them I was less convinced…

These dishes may all be enjoyed at the canalside bars and bistros that make Sète one of the more colorful towns of France’s lovely south. Handsome sailboats, fishing boats and kayaks float past as you raise a glass of Frontignan and enjoy the sunset. On weekends, there is jousting on the canal aboard huge gondola-like vessels, with the aim of each team to push the members of the other team into the drink. It’s all in good fun.

I will try to get back onto my regular schedule by posting another recipe next week. In the meantime, try the fruit cup — seasonal, easy and delicious.