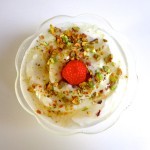 I first discovered this light dessert at Yard, the erstwhile restaurant of Shaun Kelly, one of my favorite Parisian chefs. Crushed roasted pistachios and honey marry marvelously atop a bowl of fromage blanc, the fresh and creamy cheese that is ubiquitous in France. Elsewhere, the same effect may be achieved with Greek yogurt. Add a strawberry, and you’ll bring your meal to a spectacularly easy and scrumptious conclusion.

The question — and it’s one I’ve asked myself for 40 years, since I first moved to Paris — is why this delightful form of fresh cheese is not available everywhere. The closest American equivalent, when I was growing up, was cottage cheese, which is actually not equivalent at all. While fromage blanc is smooth, cottage cheese has curds. Large or small, the curds were enough to put me off, possibly because of the image of a spider coming down beside Little Miss Muffet as she was ‘eating her curds and whey.’

In addition, cottage cheese is salty, while fromage blanc is neutral and can thus be used in both sweet and savory dishes. A revelation, upon arriving here, was that it can be used to make cheese cake with far greater ease than the dry ‘baker’s cheese’ my grandmother recommended for her cheesecake recipe from Russia. (It was a truly artisanal recipe. To my mother’s disdain and my delight, it called, among other things, for ‘one-half eggshell water’ — presumably to lighted up the leaden baker’s cheese.)

That recipe probably originally featured tvorog, the Russian version of fromage blanc. It is similar but slightly grainy and crumbly, and a bit tangy, while the French version is completely smooth and delicately bland (in a good way). Tvorog is a relative of quark (pronounced qvark), the German variety of fromage blanc, which shares its crumbly quality. If linguists are to be believed, the words tvorog and quark are related. Both varieties are used across eastern Europe in dishes like blintzes, pierogi (stuffed dumplings) and the Russian Easter cake known as paskha.

Thanks to globalization, French-style fromage blanc (or its relative, fromage frais) is now available in fine stores in cities from New York to London, and there’s no reason why this wonderful cheese should not make its way further afield in the months ahead. But if you cannot find it, or even if you can, this dessert works beautifully with Greek yogurt, which shares the smooth, creamy texture and delicate flavor of fromage blanc. Happy cooking!