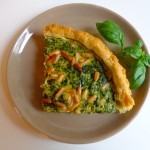 There’s a Mediterranean flavor to this quiche with spinach, pine nuts and parmesan. Perfect for lunch, accompanied by a salad and a glass of rosé, it’s a fine dish as we head into the sunny days of spring. It can also be a starter at suppertime, or the star of a Mediterranean-style buffet, with a selection of salads and spreads: tapenade, tomatoes with fresh herbs, spicy eggplant caviar, chick peas with cumin and dill, a salad of mixed greens.

But is this really a quiche? Or is it rather a savory tart (tarte salée)? And what’s the difference? The borderlines aren’t clear, but in general a quiche has more eggs and cream than a savory tart in proportion to the other ingredients. In this case, to achieve a dense, green, flavor-packed dish, I mixed the spinach with two eggs instead of the usual four, and used just half a cup of cream. But when it emerged from the oven, it tasted more like a quiche than a tart, hence its name. The parmesan adds an edge, and the pine nuts provide an additional burst of flavor, making this quiche, tart, whatever, really special.

And now out of the kitchen and into a different kind of heat. Although this is a cooking blog, as a journalist I cannot resist a little foray this week into the political life of France, where a drama with Mediterranean flavor — Greek, to be specific — is playing out between Marine Le Pen, leader of the National Front, and her father, Jean-Marie Le Pen, who founded the far-right party 43 years ago. She says he went too far when he recently repeated his notorious remark that the Nazi gas chambers were ‘a detail of history’. He says she wants him dead. And she is effectively hoping to kill him politically off by bringing him before a disciplinary committee that could boot him out of the party.

Marine Le Pen, blonde, rough and shrewd, has over the last few years led her party to heights her father could never achieve. In the recent elections for seats on county councils, the Front won 25 percent of the vote — although, under an oddity of the French electoral system, the party received only 62 of the 4,072 seats, which works out to 1.5 percent. And by the way, no mainstream French newspaper has yet (to my knowledge) commented on the unfairness of this system in a democracy…

Will she follow through with parricide? Jean-Marie Le Pen retains a hard-core following in the Front, even as his daughter has sought to ‘de-demonize’ the party. He says his daughter is being manipulated, dismissing her suggestion that he step down from politics. But even as she maintains the party’s hard line on immigration and its anti-European Union rhetoric, she can no longer abide her father’s offensive provocations — like his comments this week praising the Vichy regime during World War II — which may have appealed to previous generations on the extreme right but are alienating to younger voters.

At stake is the political future of France. Marine Le Pen has succeeded in shifting the dialogue by tapping into mounting frustration in a country that may still have fabulous food and wine, wonderful art and fashion, and a high-minded literary tradition, but where people are feeling so squeezed economically and so revolted by mainstream politicians who have failed to address their concerns that they are looking for fresh solutions.

If Marine Le Pen exorcises her father, she is likely to broaden the appeal of the Front. At this stage, she has virtually no chance of being elected president of France, despite speculation to the contrary from some quarters — because a majority of the electorate, myself included, cannot accept her party’s xenophobic platform. But she has taken on a role that is essential in every democracy, and that the French political establishment has proven impotent to perform in recent years. She is a true opposition leader. And I, for one, hope that she continues to speak out and push the boundaries of political debate.