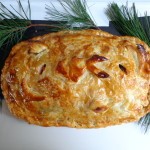 Coulibiac — it’s a French dish, right? The first time I made this succulent layered fish pie was back in the 1970s, with a Julia Child recipe. But wait. It’s also Russian, isn’t it? They call it kulebiaka and fill their pie sometimes with fish, sometimes with meat or cabbage. So what’s going on? French or Russian? I did a little research, and may have found an answer to this puzzle…

This dish was most likely invented in the 18th century, when the kings of French cuisine were serving the tsars of Russia. Antonin Carême, who was brought to St. Petersburg by Alexander I, is sometimes credited with its creation, combining French techniques with Russian ingredients to produce a dish far more marvelous than the sum of its parts.

Coulibiac consists of different types of fish layered between dilled rice, mushrooms and other fillings, all encased in a flaky pastry shell. The Russian version often includes chopped boiled eggs, but I omitted them from this recipe, substituting spinach instead. It’s a wonderful party dish, guaranteed to produce oohs and aahs when you carry it, steaming, from the kitchen — and even more swoons of delight when the guests try their first forkful.

Forward planning is essential, as preparation of this dish is a bit of a production. But it’s also fun as you build your masterpiece. And hardly a chore, now that high-quality store-bought pâte feuilletée or puff pastry is available and you don’t have to make your own dough. What to serve with coulibiac? A light starter, and then it’s a full meal in itself, accompanied by a fine white wine (French style) or iced vodka (Russian style).

The Everyday French Chef will be on vacation next week, back with more great recipes on Jan. 10. In the meantime, happy cooking. And Happy New Year!