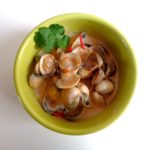 This dynamite French-Asian fusion dish of cockles in satay sauce is the creation of John O’Shea, a young British chef at the Paris bistro JJ, which happily for me is located in my building. The menu changes twice a day, according to John’s whim and what’s available at the market. Cockles appear often and, as they’re a personal favorite, I’ve ordered them more than once. Delicious! I asked John for the recipe, which he gladly provided.

Cockles, widely available here, were unknown to me until I moved to  France. I’d heard of them, of course, in the children’s song: Cockles and mussels, alive, alive oh. They are similar to clams, but smaller and sweeter. If they’re not available in your area, you can substitute very small clams, such as vongole (palourdes in French).

The first step of the recipe is immerse the cockles in cold, salty water to allow them to release any sand inside the shells, draining them and repeating the operation twice more over an hour. Once you’ve done that, preparation takes about ten minutes.

The next step is to prepare the peanut-flavored satay sauce. It is made from Thai green curry paste, coconut milk, lime juice, Vietnamese fish sauce (nuoc mam), sugar, lemongrass, peanut butter and, for the bold, a red bird’s eye pepper. This combination produces the classic taste of Thai cuisine: spicy, sour, salty and sweet.

In the final step, you will cook the cockles in the sauce. This was a revelation. I had imagined that the cockles were cooked separately and added later, but John points out that cooking them in the sauce allows their juices to blend with the satay.

You can serve this creation either as a starter or as a main dish over rice or steamed fish, decorated with fresh cilantro. It marries well with a crisp, chilled rosé.

This entry was posted in 5. Fish and Shellfish and tagged cockles, coques, french-asian fusion, recette, recipe, satay. Bookmark the permalink.