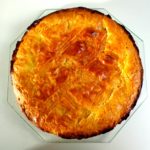 This subtle and elegant cream-filled cake is hard to find outside the French Basque country — an incentive to make it yourself. Even in Paris, it’s rare to come across a pastry shop proposing gâteau basque, which is surprising because bistros around here regularly offer other Basque dishes. Making the cake is a bit of a production — the delicate dough has to chill for a couple of hours, and is then rolled out — but the effort will win you applause.

There are actually two types of gâteau basque. This one is filled with pastry cream lightly flavored with rum and vanilla, while the other is filled with black cherry jam (and purists insist that only Itxassou cherry jam, from the region, may be used). In the first, the pastry is flavored with lemon zest, and in the second with almond extract. The cake is said to have been popularized in the 19th century by a pastry chef from the spa town of Cambo-les-Bains, who used a recipe inherited from her mother. The Basques are so proud of this cake that there is an annual Gâteau basque festival in the town and a Basque cake museum devoted in Sare, a village nestled in the Pyrénées foothills on the border of Spain.

While gâteau basque is not generally on my culinary agenda, I had the occasion to make it recently when one of my cooking students, a delightful woman from Japan, got in touch and asked me to include it in her lesson. I did a practice run ahead of time, and found the assembly to be quite tricky. The dough is beaten, as for a cake, then chilled and rolled, as for a pie. As it’s extemely tender, transferring it to the cake pan can be challenging. On the other hand, making the pastry cream is simple. When the cake has been put together, it gets an egg glaze and then a criss-cross pattern is etched on top with the tines of a fork. Fun! When Keiko and I made it together, it turned out perfectly.

This is a cake for special occasions. If you’d like to create a Basque meal to precede it, you could start with grilled squid with garlic and parsley, and serve Basque chicken with peppers and tomatoes as a main course. The cake may also be served at tea time. As for drinks to go with, unless you’re a Basque purist I’d recommend Champagne.

This entry was posted in Desserts. Bookmark the permalink.